Vancouver Sun -Sean Horlor. 'The Magic of Belize - Tours are a great way to explore.' 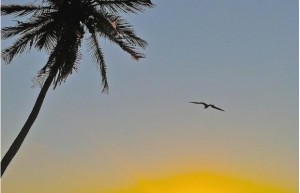 The sun sets over Lighthouse Reef from Western Beach on Half Moon Caye in Belize.
Photograph by: Steve Adams/Steamy Window Productions

We wanted to share this article that appeared in the Vancouver Sun.  Sean Horlor and Steve Adams went on our Maya Reef Explorer - Lighthouse Belize trip in early February on assignment for Postmedia.  Be sure to check out their great video!

Our guide adjusts her headwrap and looks over her shoulder at the rainforest. The hem of her powder-blue dress twists in the breeze as she waits for us in the shade. For a second, the combination of heat, heavy shadow, and bright colour make me feel like I’m staring at a Diego Rivera mural.

“She’ll be waiting for you over here until you’re ready, nice people,” Ann-Marie Avona calls out, breaking the spell. It takes a second for me to realize that our guide is talking about herself in the third-person. I could listen to her Kriol-laced accent (similar to Creole, but with English instead of French) for hours.

It’s Friday afternoon and aside from the staff and vendors in the parking lot, the temple site at Altun Ha is completely abandoned. When Ann-Marie catches me staring at a half-finished building beside the main gate, she fans herself slowly and jokes, “This is Belize. Nothing here gets done quickly, just eventually.”

Steve and I are halfway into our Maya Reef Explorer tour with Pemberton-based Island Expeditions. Earlier that day, the staff at our lodge in Crooked Tree Village (roughly an hour inland by car from Belize City) pulled some strings so we could arrive at the Altun Ha temple complex after all the other tour groups had left for the day.

After we pass through the entry gate, two of the tougher American women in our tour group waste no time. Here, like many other archeological sites in Belize, you can still race to the top of the massive pyramids and look out over the Belizean rainforest and savannah.

Ringed by jungle, Steve and I join them and climb up a burial temple on our hands and knees. This is by design: The steps are so steep, you have to surrender yourself to the sky and crawl up on all fours.

On a deserted afternoon like this, if you clap your hands in front of the main staircase to Temple A-1, the pyramid answers with the call of a quetzal bird. We try to a “chir-ruup” echoes through Altun Ha. Ann Marie tells us in ancient times, a priest clapped to signal the start of a new day of trading in the plaza between temples.

Later, back at the Bird’s Eye View Lodge, Steve and I decide to get chummy with a bottle of One Barrel Rum on the patio outside our room. The rum — sweet with caramel notes and arguably the best in Belize — lives up to its reputation as the perfect pairing for a tropical sunset.

Like clockwork, the wind that blows all day over the mainland stops as the sun vanishes behind a massive cashew tree, then drops below the horizon. Bats and fireflies begin to circle above us. The Milky Way materializes overhead in a thick, mind-boggling strip and the sky fills with stars and constellations I haven’t seen since childhood.

At the end of a six-kilometre-long dirt road, Crooked Tree is an isolated village surrounded by a national wildlife sanctuary and a massive freshwater lagoon. It’s a spectacular spot to rest, relax, and reset, the polar opposite of Belize’s more developed tourist areas like Caye (pronounced “key”) Caulker and Ambergris Caye.

The next morning, we pack our bags and steel ourselves for the island portion of our tour. We catch Miss Verna — one of the lodge owners — staring out the window of her office at a fog bank. “It’s going to be hot today,” she warns us.

Our early-morning drive to Belize City takes on a new, sobering dimension: Visibility dwindles to roughly 50 metres and bicycle riders and pedestrians on the highway seem to appear out of nowhere.

Hours later, the fog still hasn’t fully burned off as our boat, the Belize Beauty, pulls out of Belize City. True to Miss Verna’s prediction, the humidity is intense, but is easy to ignore on the open water.

First we pass through a break in the Mesoamerican Reef, which runs down Belize’s eastern coast to Honduras. It’s the second largest reef system in the world. Lighthouse Reef, our destination, lies in the open ocean beyond the endless mangrove wetlands and the gargantuan Turneffe Atoll.

Island Expeditions operates a one-of-a-kind base camp on Half Moon Caye, with oceanfront tent-walled cabanas and excellent snorkelling and sea kayaking guides. They have an exclusive licence to operate on this cay.

A portion of their tour revenue funds protection programs, a research facility, ranger station, and visitor centre on the small, three-hectare island.

The nautical approach to Half Moon Caye doesn’t disappoint either: the long dock jutting out from a pristine, palm-dotted beach is straight out of a daydream. Clearly, this is the kind of place where ecotourism can speak to both your heart and your head.

After we are assigned beach tents and a quick orientation by camp manager Amelia — a Garifuna woman who’s all heart — our small group is outfitted with snorkels and fins. We head straight out to a tidal snorkelling area just south of the wreck of the Elksund for our first dive.

The water surrounding the bright coral is shallow and full of life. We see angelfish, grouper, snapper, lobster and even an octopus in quick succession along with countless other fish and sea creatures. Back on the shore, warm water lapping around my fins, I realize Belize is like a magician’s scarf. You know the trick: That never-ending rainbow of fabric pouring out of a magic, black hat. Except here, the scarf never seems to end.

The contrast is from jungle to reef, from plant to animal and everything else between. Despite the intense collision of very different cultures — Kriol, Mestizo, Garifuna, Chinese, Indian, Spanish, and English — even the people are genuinely friendly, like shout-out-hello-as-you-pass-on-a-bike kind of friendly.

In a word: Belize is paradise, in both senses of the term. A physical place you can visit and a larger idea you can dream about long after you leave.