We wanted to share this great article by travel writer Mara Vorhees that featured in the Saturday January 23rd edition of The Vancouver Sun.  Mara and her twin boys Van and Shay, joined us on the Lighthouse Reef Getaway trip followed by a stay at the Bocawina Rainforest Resort.  Mara shares her story as the family spends their days exploring Half Moon Caye, learning about hermit crabs and discovering what lives under the sea through a snorkel and mask.  After a stay at our Lighthouse Reef Basecamp, they venture into the beautiful Mayflower Bocawina National Park where the boys experience zip-lining through the rainforest canopy.

My stomach roiled as the boat rocked and rolled along the Caribbean waves, and our two-hour journey stretched into three. The patchwork of emerald and azure waters was barely visible through the small windows of the boat’s interior cabin. The fresh sea air was not reaching us below deck. Our destination was an idyllic island off the coast of Belize, which would be delightful, I was sure.

I was anxious. Not only was I on an adventure tour in this remote corner of the Caribbean, but I was travelling solo with my four-year-old twin sons. No dad, no grandparents, no babysitter — just me and my ever-lovable, energetic, opinionated, unpredictable, exhausting twins.

So far, at least, the boys were holding up. Shay looked as queasy as I felt, but he was lying quietly on the cushioned bench. Van, by contrast, was standing up on the bench so he could see out the window, peering through his red plastic binoculars. “I already spotted three flying fish,” he boasted to anyone who would listen. Finally, he announced that he could see the island. And shortly thereafter, we were clamouring off the boat, breathing the salty air, and taking off our shoes so we could feel the sand between our toes. We had arrived, and it was indeed paradise.

Located 85 kilometres off the coast of Belize, Half Moon Caye is a stunner. It’s everything you imagine a tropical island to be — swaying palms fringing white-sand beaches and a vibrant coral reef lurking just below the surface of turquoise waters. The island is also a wildlife sanctuary, protecting a rookery of red-footed booby birds. And it is the site of a base camp for the Canadian adventure company Island Expeditions.

I had been telling friends and family we were going to a resort. That was a misnomer. Our short orientation revealed that we would be sleeping in tents (heavy-duty tents with wooden floors and beds, but still … tents). We would be using composting toilets, showering outdoors and reading by kerosene lanterns.

Fortunately, we would also be doing morning yoga on the beach, taking afternoon naps in hammocks, drinking rich Belizean coffee for breakfast and eating fresh-caught seafood for dinner. So, not a resort, but not without a uniquely Belizean brand of luxury.

The twins and I spent our first afternoon exploring the island and swimming in the warm water. We discovered that Half Moon Caye is crawling with hermit crabs.

During the day, you see them here or there. But as the sun sets, they emerge from their hiding places and litter the pathways and beaches.

Initially, the twins were weirded out by these creepy-crawlies who carry their houses on their backs, despite my insistence that there was nothing to fear.

Nonetheless, when our excellent guide Daton offered to take the boys on an exploration mission, they both jumped at the chance to hang out with their new friend. Van announced “Daton said do I want to go looking for hermit crabs and I said yes. Because guess what? I’m not afraid of them anymore!” We were off to a good start. 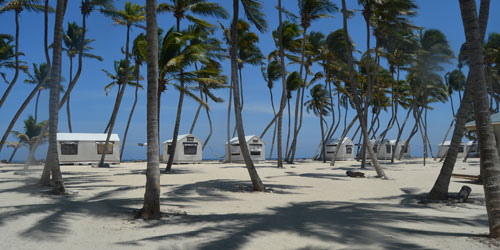 The Island Expeditions base camp is a launching pad for exploring the aquatic environs around Half Moon Caye — by kayak, standup paddle, or mask and snorkel. During our time on the island, I hoped to teach the twins to snorkel.

They were nervous. Van was uncharacteristically quiet, but Shay was whining and anxious as we walked to the beach and got our gear on. He complained every step of the way — hot sand, long walk, stubbed toe, water shoes, no water shoes, leaky mask, tight mask.

But when he finally got geared up and put his face in the water, a magical transformation took place. It was less than a foot deep — there was nothing to see but minnows and sea grass — but both boys were entranced by the wondrous world they entered.

We swam a short way out to a snorkel site known as Octopus Garden. There, we grunted greetings to the grunts; we studied sweet butterfly fish and dusky damselfish; and we came face to face with a grim barracuda. Daton had brought a lifebelt for the boys to hang onto, but the twins were not interested. Van wanted to hold my hand, while Shay swam independently. The whining, anxious boy had become the master of the seas. 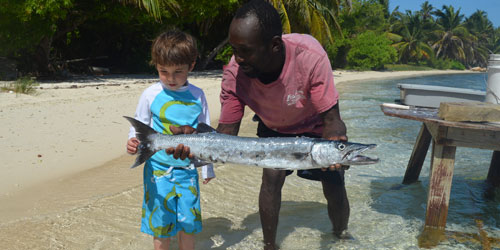 After a few days on the island, we said goodbye to Daton and our other new friends, and we travelled inland to the Bocawina Rainforest Resort, near Dangriga, Belize. The cosy thatch-roof cabanas at Bocawina looked rustic on the outside, but cushy on the inside. We were done with kerosene lanterns and composting toilets, thanks to the lodge’s solar panels and hydro dam.

The place was lovingly decorated with carved wooden furniture and tropical themed paintings and big bouquets of gorgeous blooms. It felt downright sumptuous.

Located on the edge of the Mayflower Bocawina National Park, this lodge is surrounded with dense vegetation, a handful of waterfalls and kilometres of walking trails. It’s also the site of the country’s longest zip-line, which was next on the docket for the adventure twins.

Van was cool and confident. Shay was afraid. He eventually agreed to give the zip-line a try — as long as his brother went first. The boys were each buckled up to their own guide, so they didn’t have to worry about speeding up or slowing down or — that irrepressible fear — getting stuck in the middle of the run.

And then we were off, zipping through eight runs, flying across more than two kilometres of rainforest canopy, and even rappelling down from one platform. Van was loving every minute of it, while Shay continued to make a show about how scary the ride was. But time after time, as he came across the treetops and landed on the platform, his bright eyes and beaming face gave him away.

The route culminated in the longest, fastest 700-metre run. Then the last zip was a short one — basically transporting us to a staircase-accessible platform so we could get down.

The guides informed us that the boys could do the last one by themselves, and much to my surprise, Shay announced that he wanted to go first. And he did, coasting confidently across the grassy pasture and into the arms of his partner guide, effectively overcoming one more fear.

We did it, I mused at the end of our adventure-packed holiday. We zipped, we snorkelled, we hunted for hermit crabs, we slept in tents. We got seasick. We spotted flying fish. We went to Belize all by ourselves and we survived. And we thrived. 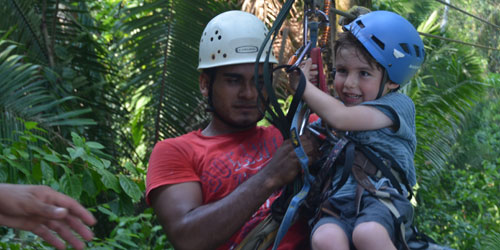 The writer was a guest of Island Expeditions. Island Expeditions did not read or approve of this article before publication.Mara Vorhees is a freelance travel writer and author of Lonely Planet Belize. Follow her adventures at havetwinswilltravel.com.