The Vancouver Sun - Janet Gyenes "Into the Great Blue" 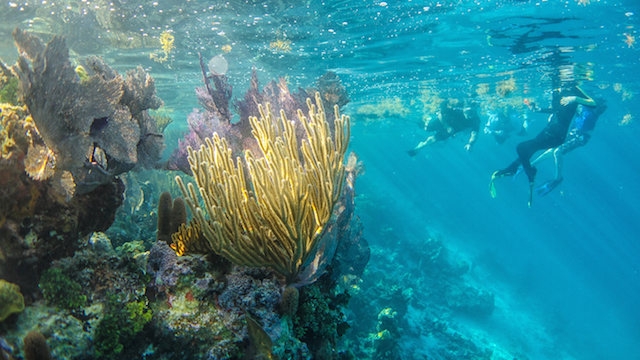 We wanted to share this article by travel writer Janet Gyenes, that featured in the November 19th edition of The Vancouver Sun.  Janet joined us on our 10 day Double Atoll Adventure in April 2016, where she visited and explored both Lighthouse Reef Atoll and Glover's Reef Atoll.

I’m floating 70 kilometres offshore in the Great Blue Hole, a 125-metre deep sinkhole in Lighthouse Reef. And although aerial photos show a circular sapphire set in turquoise, it’s high tide, so it feels like we’re swimming in an oversized infinity pool.

It’s a surreal shade of blue that beckons with untold treasure. Measuring 300 metres across, this natural phenomenon became synonymous with Jacques-Yves Cousteau who popularized this Belize dive site in the early 1970s. At our basecamp on Half Moon Caye park ranger Bill from the Belize Audubon Society tells us that Cousteau “blew a piece of the crater out of the Blue Hole using dynamite” to gain better access to the heart of this adventure playground.

All of Belize seems primed for amusement or escape. Ambergris Caye and Caye Caulker are still sun-drenched hotspots, and new properties promising exclusivity are also under development. Like the Itz’ana Belize Resort & Residences (opening in March 2017) with its luxury lagoon villas, solar cottages and private island (not to mention a library inspired by Ernest Hemingway). Meanwhile, Leonardo DiCaprio’s passion project, Blackadore Caye, is taking sustainability to a utopian level, perhaps an homage to his movie, The Beach. The actor-activist’s offshore idyll will welcome residents and guests in 2018.

I’m staying a world away, spending six days at isolated off-the-grid basecamps on Glover’s Reef and Lighthouse Reef as part of a 10-day guided excursion with Island Expeditions. My journey with the British Columbia-based outfitter starts in Dangriga, a 15-minute flight from Belize City. It’s where we set off to explore the Belize Barrier Reef Reserve System, a UNESCO World Heritage Site and the second-largest barrier reef in the world.

Cousteau’s opening allows our boat, the only one there on this day, to enter the sinkhole’s inner chamber.

“Keep left,” says Rodney, one of three guides accompanying our group. As we jump off the boat to circumnavigate the inner rim of this abyss I’m aware that in the dark domain beneath my fin-clad feet are black-tipped sharks, stingrays and other outsized creatures that grow with wild abandon in this protected area.

My shallow breathing echoes in my ears. But as I swim out of the sinkhole’s shadows and into the beams of sunlight illuminating the clear water, massive purple and ochre fan corals wave in concert with the current to calm my nerves. Someone points out silly-looking black-and-white tiger tails—a type of sea cucumber—almost two metres long. Cartoonish-looking tube corals act as hideouts for fish. I glimpse twin triangles to my right: eagle rays flying in formation like fighter jets. A few of us try to keep up with these stealth creatures, but they disappear into the darkness. Exhilarated, we surface to share our amazement at what we’ve witnessed.

Back on shore at Southwest Caye, our basecamp on Glover’s Reef is the picture of lo-fi living. It’s a playful paradise-found. But not in a reality-TV kind of way where people eke out a Robinson Crusoe-type existence and shun creature comforts. The dozen white safari-style tents staked among the palms are a bit of bliss in the sand, cooled by breezes buffeting through screened windows.

My seaside home is a spartan-yet-comfy setup with a kerosene lantern atop a tiny table painted the precise shade of turquoise as the water. Nearby, camp cook Miss Annette emerges from a powder-blue building to say a shy hello before ducking back inside the kitchen to prep lunch: grilled snapper with homemade tartar sauce, bean salad and chewy coconut-ginger cookies. Like us, she’s a temporary castaway on this sliver of sand suspended in the Caribbean Sea.

It’s time to get back on the water. Six or so of our group settle into kayaks to explore a handful of the hundreds of patch reefs off Glover’s with our guides Mario and Mike. Just offshore we raft together and anchor in the shallow waters, trading paddles for snorkels and fins. Soon, I’m floating face-down, mesmerized by a kaleidoscope of psychedelic colours and shapes rearranging themselves before me as fish dart among coral colonies.

A flash of silver punctures my playful abstraction as Mario thrusts his spear into the belly of the beast—a Pacific red lionfish—and swims to the surface. Snorkels protruding from our mouths, our group gawks at this interloper in these otherwise pristine waters. Still alive, the painterly fish slips off the spear. Mario curses, takes a gulp of air and dives back underwater to recapture his prey, but he comes up empty; the invasive species won’t make it to the dinner table this time.

I spend hours exploring Glover’s seemingly limitless landscapes, lured to the life beneath the surface—day and night. Later, our guide Budge coaxes five of us into skipping hammock-and-beer downtime for more underwater exploration. We slide into a bed of seagrass for a moonlit snorkel, bubblegum-pink flashlights tethered to our wrists. Plunging into the darkness, it becomes clear that we’ve crashed an underwater party. Swarms of neon-blue fish bounce off my beam like strobes. Sleek squid, decorated in luminous green stripes, flutter past. A large spiny lobster glares at me with beady eyes.

A few days later, at Half Moon Caye and our Lighthouse Reef basecamp, the land- and water-based playing field amps up further. We snorkel near the remains of the old lighthouse that tumbled into the sea, dodge hermit crabs on the way to sunrise yoga classes and visit the colony of 3,000 sula sula (red-footed boobies) that live in the canopy of orange-blossomed ziricote trees. Guides Roo and Daton take us fishing outside of the protected area, where we bake in the sun and enjoy the thrill of feeling a tug on our lines.

“I caught another one!” says Calvin, a six-year-old from land-locked Colorado. It’s the eighth fish he’s hooked and part of a haul Roo cleans by the beach, tossing remains to the frigate birds and a nurse shark and stingray that swim right to shore. Our catch feeds the group at dinner. But not before the evening happy hour, when we drink beer with homemade cassava chips while watching the sun turn into a glowing orange orb on this idyllic playground.

The Double Atoll Adventure heads out to Lighthouse Reef and Glover’s Reef, two remote atolls offering some of the best snorkeling, paddling and marine exploration in the Caribbean Sea. Highlights of the trip include snorkeling ‘The Aquarium’ and Captain Jacques Cousteau’s renowned Blue Hole.

This 10-day/9-night trip also includes a night at the Bocawina Rainforest Resort, an eco-lodge located in the heart of the Mayflower Bocawina National Park. Contact us today to find our more about this trip and our other adventures in Belize.