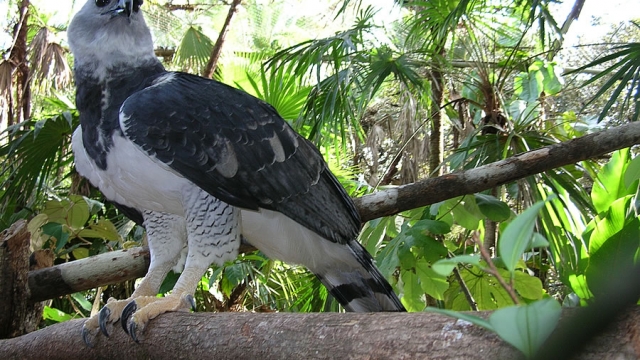 Check out this article about two new Harpy Eagle nests recently found in the Maya Mountains of Belize.  It's exciting news, as Harpy Eagles are considered "Critically Endangered' in Belize.

For more than a decade, most Island Expeditions trips begin with an overnight stay at the Tropical Education Center which is part of the Belize Zoo.  These stays support the Zoo and the work of the founder, Sharon Matola - including her Belize Harpy Eagle Restoration Program (BHERP).  In 2007 Sharon worked with Panama to bring Harpy Eagle chicks to Belize and reintroduce them into the wild.  When you're visiting the Zoo, be sure to go see 'Panama', - the Zoo's Harpy Eagle and ambassador for BHERP.  The Harpy Eagle is one of the four largest birds in the world, and, at age nine, Panama has a wing span of almost six feet!

TOLEDO DISTRICT, Belize – Scientists and local community members recently discovered two new Harpy Eagle nests in the Maya Mountains of southern Belize.  The new nests in Belize are approximately 15km from one another; the first, located in Columbia River Forest Reserve, was discovered by a resident of a nearby village in July 2012. A female Harpy Eagle was observed interacting with the nest by the Belize Foundation for Research and Environmental Education (BFREE) Avian Technicians over the following weeks; however, no juvenile was sighted. The second nest was discovered in January 2013 by BFREE Avian Technicians; William Garcia, Liberato Pop, and Marlyn Cruz, during bird monitoring surveys in the Bladen Nature Reserve. This nest and its residents – both adult parents and their juvenile - were monitored on a monthly basis, and in May 2013, the healthy juvenile fledged.

“These nests may be the most significant biological discoveries for Belize in recent years,” states Jacob Marlin, Executive Director of BFREE. The presence of the nests suggests that a healthy breeding population of Harpy Eagles exists in this remote area. The magnificent raptors were thought to be locally extinct in Belize since 2000 and extirpated from Mexico and most of Central America until 2005 when a team from BFREE sighted a juvenile Harpy while on expedition in the Bladen Nature Reserve.  Harpy Eagles (Harpia harpyja) are designated as “Near Threatened” by the International Union for Conservation of Nature (IUCN) and are considered “Critically Endangered” in Belize.

The initial sighting in 2005 led to a collaborative program begun by Mr. Marlin and Dr. Jamie Rotenberg, ornithologist and Associate Professor of Environmental Studies at the University of North Carolina at Wilmington. The program entitled, An Integrated Community-Based Harpy Eagle and Avian Conservation Program for the Maya Mountains Massif, was created to monitor the species, find nests, and study the entire bird community. Central to this initiative is the training of local people from nearby buffer-zone villages to monitor the birds and collect scientific data as part of an innovative alternative livelihood-strengthening program. The resulting team of Avian Technicians conducts the majority of the research; five of whom were responsible for locating both the first-ever recorded active Harpy Eagle nest in Belize in November 2010 (as documented in The Wilson Journal of Ornithology, 2012) and one of the two recently discovered nests in January 2013.

Harpy Eagles are well known as one of the most powerful eagles in the Americas, hunting prey as large as monkeys and sloths for food.  Birds can weigh up to 20 pounds and have a 7-foot wingspan making them a formidable predator.  However, due to deforestation and hunting, Harpy Eagles are typically missing from most of Central America’s rainforests where they once freely ranged. In November 2012, another Harpy Eagle nest was discovered in Patuca National Park in Honduras, south of Belize.  “These new nest discoveries in Belize and Honduras are significant because only a handful of individual Harpy Eagle sightings were made in Central America north of Panama over the last decade,” said Rotenberg. “It means that Harpy Eagles are hanging on in these remote protected parks and reserves, and they may not be as isolated as we once thought.”

Because of the sensitive nature of the nests, Rotenberg, Marlin and BFREE decided to wait until the juvenile safely fledged the nest before releasing the news of the new Belizean nests.  “We waited until now to release the news because we wanted to make sure the young Harpy Eagle fledged the Bladen nest,” said Rotenberg. “Other than reporting it to the Belize Forest Department and Ya’axché Conservation Trust, who jointly administer the reserve, only a handful of local conservationists knew about the Bladen nest. This was the same for the Columbia River Forest Reserve nest too, just adding the folks of the local village nearby.”

“After we publicized the discovery of the first nest in 2010, there was a lot of excitement within Belize about it, including reports on the radio and television.  Unfortunately, Mother Nature took that nest tree down with a bolt of lightning,” said William Garcia, Lead Avian Technician at BFREE. In response to BFREE’s request to continue expeditions in search of the surviving birds, in 2012 the Columbus Zoo and Aquarium provided funds to continue monitoring of the area surrounding the original nest.

Ya’axché Conservation Trusts protected area rangers also stepped up their protection of the immediate location of the nest to help ensure the survival of this iconic species.  Protected Area Manager, Lee Mcloughlin, indicated that the valley in question had been known to be a target of illegal hunters, fishers and even looters of the many late Classic period Mayan archaeological sites located on the lower slopes,

When interviewed about the 2013 Bladen nest discovery, Mr. Garcia stated, “My technician team and I were on a bird monitoring expedition when we heard a juvenile Harpy Eagle call.  Because of all of our monitoring experience with the eagles, we know that call very well.  After just a bit of looking, we located the nest right away. It was very exciting to find the new nest only about 500 meters from the old one,” Mr. Garcia went on to say that it shows the bird’s resilience that the pair re-nested in the same area.

Garcia made the first presentation to the scientific community about the new nests at the Belize Chapter of the Mesoamerican Society for Biology and Conservation’s Natural Resource Management Symposium held at the University of Belize this past spring.  Garcia covered eight years of Harpy Eagle research since that initial sighting in 2005. “I was happy to have the opportunity to share our research and let people know that Harpy Eagles are still their neighbors,” said Garcia.

Mr. Marlin added that, “Discovering top predators such as Harpy Eagles in places like the Bladen Nature Reserve and the Columbia River Forest Reserve means that preserving protected areas works. Besides Harpy Eagles, the 1.5 million acres of continuous tropical rainforest that makes up the Maya Mountains protects a wealth of biodiversity.   The Belize Protected Areas System is one of the largest protected tropical rainforest ecosystems left in Central America -it is often referred to as the last remaining truly unspoiled wilderness areas of its kind.” 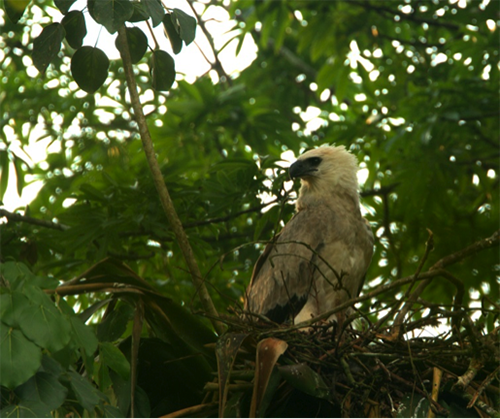