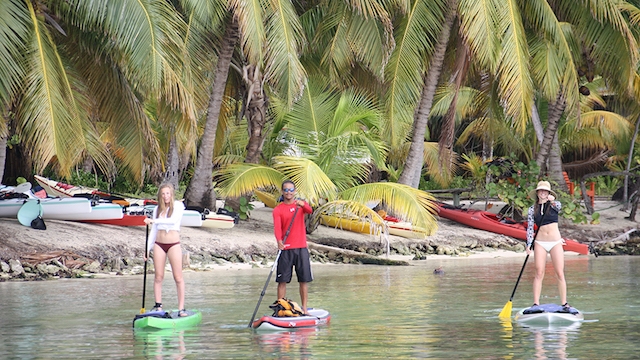 We were delighted to have our Coral Islands SUP with Norm Hann Expeditions trip featured in the SUP Magazine.

The article was written by travel writer Eugene Buchanan and featured in the November 15, 2016 online edition of the SUP Magazine.

Get Your Copy of our Free Belize Adventure Guide and find out more about the Coral Islands SUP with Norm Hann Expeditions trip.

You can’t help but feel a tad insignificant while standup paddleboarding alongside the second largest barrier reef in the world–extending 1200 miles from Mexico to Honduras.

Nevertheless, you’ll learn to embrace that feeling on Island Expedition’s new Coral Islands SUP trips in Belize. The trip takes you along the northern edge of the Southwater Caye Marine Preserve, the largest of nine in the country.

With 30 years of experience in Belize as a sea kayak outfitter, IE has recently added a complete offering of SUP trips to its arsenal. They offer a six-day island-to-island Coral Islands SUP Expedition, as well as Basecamp SUP excursions and self-guided options from November through May.

IE launched its inaugural Coral Islands SUP journey in February 2015, the first of its kind in Belizean waters. These standup paddling programs have been developed in partnership with Norm Hahn, one of Canada’s leading SUP instructors.

On these lodge-based trips you will stay on two different cayes in the Southwater marine reserve, giving you the opportunity to paddle and explore more than 30 miles of tropical waters. When the wind kicks up, boat support means either exhilarating downwind paddling or searching out calmer waters in mangrove lagoons. Also when it’s time to move between lodges, the support boat carries your gear.

The island-hopping journey starts with a boat ride to a dreamy five-acre island, Eden of Tobacco Caye. You spend two nights here in waterside cabanas, with hammock-lined decks hanging over the water. During your first day on the water, a certified SUP instructor evaluates participants’ skill levels and then plans the days’ activities–including SUP instruction and coaching. 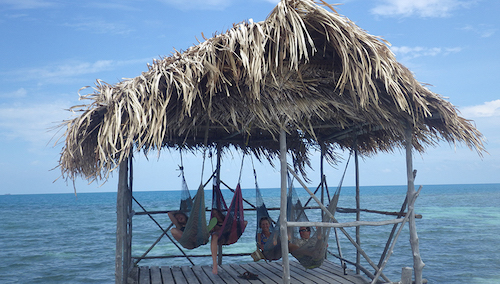 Between conch bugles signaling mealtimes, you’ll head out for day paddles, snorkel the reef, paddle through calm mangrove channels and ease into the don’t-worry-be-happy rhythm of the islands.

On day three, you’ll load your gear into the motor skiff and head south for a full day’s paddle to South Water Caye and your new beachside accommodations at the award-winning International Zoological Expeditions base lodge. Once there, day trips will take you to islands such as Billy Hawk, the dual snorkeling hotspots of Bread and Butter Caye, and the scientific outpost of Carrie Bow Caye–a marine research field station leased by the Smithsonian Institute.

All of which makes your petty problems back home melt away with the sunset.