Writer Debbie Olsen and her daughter Kelsey recently joined our Glover's Reef & River of Caves trip for some snorkeling, paddling and Stand Up Paddleboarding.  Here is her article that appeared in the Red Deer Advocate on January 11th. 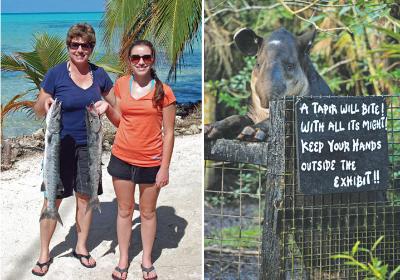 LEFT: Debbie and Kelsey pose with the two barracuda they caught on a morning of fishing.

RIGHT: Baird’s Tapir is the national animal of Belize. During the first two days of the journey, we visited the Belize Zoo where we saw this Tapir.

Some resolutions are easier to keep than others. Like most people, I have been known to cheat occasionally.

On this night, it’s after dark and I am sneaking out to access Wi-Fi. What makes it worse is the fact that I am contributing to the delinquency of a minor by bringing my teenage daughter along. We are on a digital detox vacation, which means no Internet, no text messages and no computers.

The thing is, I really need to contact my editor and Kelsey wants a little Facebook time with her friends.

Since I am unsure if her excuse is any less legitimate than mine, I decide to bring her along — that and the fact that we are sharing the same tent and she is a light sleeper.

Island Expeditions doesn’t bill their Glover’s Reef and River of Caves tour as a digital detox, but the seven-day Belizean adventure tour makes an ideal escape from the world of technology and that’s what my daughter and I originally resolved to do. In a world where text messages, email, Facebook, Twitter and other social media platforms are omnipresent, it seemed like an ideal escape for a tech-addled teen and her over-connected mom.

After two days in a jungle retreat, we arrived on the tiny island of Southwest Caye, which is near one of the world’s best snorkelling and diving reefs about an hour by boat from mainland Belize.

We are camping for five nights in comfortable beachfront tents with actual beds inside them and there is no cellphone signal, no Wi-Fi and only a few hours of electricity available each evening.

This type of vacation has its advantages for busy people who spend too much of their time glued to a computer or stuck on a smartphone.

“The fact that there was no cellphone access was not the deciding factor for me when choosing this trip, but it was a definite plus,” said Liza, a busy attorney from Washington, D.C., who was part of our small tour group. “If you are off the grid, no one can disturb you. They just have to deal with the little emergencies that pop up or wait until you return to the office.”

The lack of technology is a bit of an adjustment, though. After two days without access to technology, Kelsey is feeling a phantom vibration in the pocket where her cellphone usually resides and my fingers are itching to get back to my keyboard. When we discover that the resort at the opposite end of the island has Wi-Fi, we decide to slip over and try to access the signal.

According to a Franklin Covey survey, more than two-thirds of people who make New Year’s resolutions break them before the year is out — many don’t even make it to the end of January. I try to make resolutions and set goals for myself throughout the year, but I still occasionally struggle to keep my resolve. That said; a moment of weakness is no excuse for giving up on a goal. After our brief fall off the wagon, Kelsey and I recommit ourselves to spending the remaining four days technology-free.

We arise early the next morning to take part in a sunrise yoga class. In the shade of coconut palms, we are led by a yoga instructor through the downward facing dog, the upward facing dog and other more advanced yoga poses, building up a good appetite for breakfast.

Despite the rustic nature of the camp, the meals are very good and Bol, our chef, makes sure that no one goes hungry. After breakfast, it’s time for a guided kayaking and snorkelling trip. Kelsey and I take a double kayak and paddle halfway to the nearby island of Middle Caye before stopping to follow our guide Bernaldo on a snorkel tour of Glover’s Reef.

Tomorrow we will paddle all the way to Middle Caye, explore a bit and then put sails on the kayaks and let the wind take us back to Southwest Caye. Today we paddle back in time for a hearty lunch, which is another testament to Bol’s abilities to create magic in a rustic camp environment.

Our afternoon is spent trying to learn the art of stand-up paddleboarding. While it is not a new sport, it is new to most of the people in our group — including Kelsey and me.

Our instructor has us begin by kneeling on the oversized boards and paddling around the bay. When we are ready, we slowly move to a standing position and practice manoeuvering the boards around the lagoon. Most of the adults struggle to maintain their balance, so we all sit in awed amazement when the cocky teenager manages to show us all up by doing a headstand on her board.

There’s enough time to relax in a hammock and read a few chapters from the books we brought with us before we all gather for pre-dinner drinks and hors d’oeuvres. A sumptuous dinner follows with plenty of opportunities for laughter and conversation about the day’s adventures. When night comes, some of the guests stay in the day lodge visiting and playing a board game until the generator is shut off.

As Kelsey and I make our way back to our beachfront tent, we pause and look up at one of the most magnificent star-filled skies we have ever seen.

There is virtually no light pollution when you are on a tiny island in the middle of a vast expanse of ocean, so we wander onto the boat dock near our tent, lie down on the wooden planks and try to figure out where the Big Dipper is. Just then, Kelsey spots a falling star and we both make a wish, which leads to a rousing rendition of Jiminy Cricket’s classic When you Wish Upon a Star song.

By the time we are ready to get up and make our way to our tent on the beach, we have forgotten completely about the good Wi-Fi signal on the other side of the island. It turns out life can be good with a little resolve to take a break from technology.

l Island Expeditions is a Canadian-based adventure company that offers a variety of all-inclusive adventure tours in Belize. Some itineraries include Internet access and some do not, but all of the seven-to-10-day guided expeditions provide the opportunity for guests to explore the world-famous coral reefs and atolls surrounding Belize and enjoy the sports of sea kayaking, kayak sailing, snorkelling, scuba diving, stand-up paddleboarding, yoga, windsurfing and sport fishing.

l We experienced the Glover’s Reef and River of Caves tour. The seven-day tour runs from November through May and starts at $1,899 per person, including all meals, transportation and comfortable camp-style accommodations. Airfare to Belize is not included in the rate, but starts at about $645 per person from Calgary, depending upon the dates of travel. After a two-night rainforest adventure that includes river tubing through caves, guests are transported by boat to Southwest Caye for five more nights of island adventures near Glover’s Reef. For more information, visit: www.islandexpeditions.com.

Debbie Olsen is a Lacombe-based freelance writer. Follow Debbie’s travels at www.wanderwoman.ca. If you have an interesting travel story you would like to share, please email: DOGO@telusplanet.net or write to: Debbie Olsen, c/o Red Deer Advocate, 2950 Bremner Ave., Red Deer, Alta., T4R 1M9.