We wanted to share this article that appeared in the Vancouver Sun and Calgary Herald this January. Postmedia family columnist Debbie Olsen joined our classic Glover's Reef and River of Caves trip with her teenage daughter Kelsey.  We thought you would enjoy reading about their mother-daughter adventure. 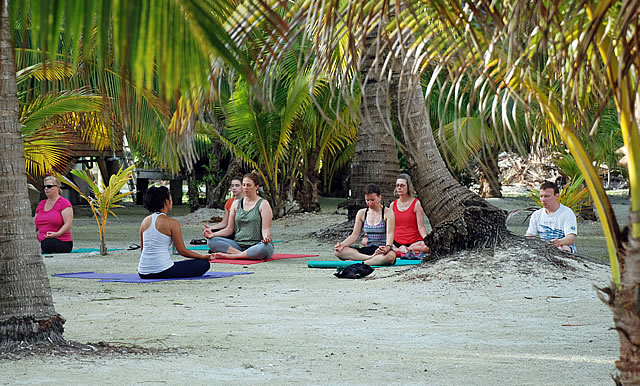 It was our first night in Belize and things were not starting out well.

She had a point. I hadn’t used the word “camping” because to me camping means a sleeping bag on the floor of a tent. We were in a comfortable wooden cabana with beds, mattresses, pillows and sheets. There was electricity and a central shower area with running water and flush toilets. This wasn’t really camping.

I suspected the underlying problem was really a case of nomophobia or fear of being out of cellphone contact. With no cellphone signal and no Wi-Fi, the cabanas were practically prehistoric — in a teenager’s mind, at least. When I booked the trip with Island Expeditions, I had hoped that a few days away from technology on a mother-daughter adventure trip would be fun for both of us.

The adventure began the next day with a half-day guided river tubing and caving tour. We were transported by bus to a lush rainforest area where we each selected an inner tube, a life-jacket and a hard hat with a headlamp. Our guide pointed out unique flora and fauna as we hiked along a well-travelled trail through lush rainforest. When we stopped for a short rest, our guide pulled a rust-coloured stone from the river and painted everyone’s faces Mayan style. He said it would bring good luck in the caves.

Eventually we climbed aboard our tubes and rode them down the river and into a limestone cave system filled with stalactites, stalagmites and other fascinating rock formations. With nothing but the light from our headlamps it was sometimes eerie as we floated and hiked our way through the caves — no wonder we needed that good luck.

After a hearty lunch at a local restaurant, we visited the Belize Zoo to get a first-hand look at their jaguar rescue program and meet the jaguars up close. Island Expeditions is a big supporter of the zoo’s conservation efforts and it was good to know that our travel choice was going to support a worthwhile conservation initiative.

The next day, we travelled cross-country by van and then boarded a boat to make the one-hour journey to the tiny island of Southwest Caye on Glover’s Reef Atoll. One of the richest marine habitats in the Caribbean Sea, Glover’s Reef is considered by many to be one of the world’s top snorkelling and diving areas. Using the tiny island as a base camp, we planned to spend the next six days exploring the reef.

This time we were staying in actual tents, making it difficult to argue with Kelsey’s assertion that I should have used the word “camping” when describing the trip.

On the upside, the large tents were beachfront and equipped with beds, mattresses, sheets, pillows and furniture. Toilet facilities were another matter.

“I miss plumbing,” she said when she realized that she would be using a composting toilet and a solar-powered shower for the next few days. Once again, there was no Internet and no cellphone access at the base camp.

It didn’t take long to get into the routine of camp life, which began with a daily sunrise yoga class led by a professional yoga instructor under the shade of coconut palms, and ended with a delicious dinner in the main dining lodge.

In between there were snorkel tours, kayaking expeditions, kayak sailing, standup paddleboard lessons, a guided fishing excursion and plenty of time for hammock surfing with a good book.

Each night after dinner, Kelsey and I made a habit of lying out on the boat dock and gazing up at the magnificent star-filled sky. There is virtually no light pollution when you are on a tiny island in the middle of a vast expanse of ocean.

On our last night in Belize, while we lay on the dock trying to locate the Big Dipper, Kelsey spotted a falling star — her first ever.

“I really loved this trip,” she confided as we made our way back to our tent a few minutes later. “Maybe camping really is my thing.”