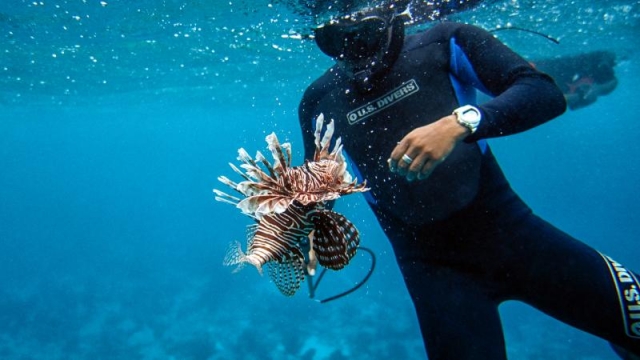 At Island Expeditions' camp on Half Moon Caye, you can fish for your own lionfish dinner.    Photo: Duarte Dellarole

We' wanted to share an interesting article which appeared in Outside Online on April 14, 2015.  Freelance Writer and Outside Magazine Contributing Editor Stephanie Pearson joined our Lighthouse Getaway to do some 'lionfish hunting in Belize' and learn about Island Expeditions' lionfish eradication initiatives. Her article provides a great overview on the lionfish problem in the Caribbean and Florida, and various conservation efforts in motion to reduce lionfish numbers.

Killing on These Vacations Is a Good Thing

Spearfishing lionfish in Belize is bloody paradise, and it’s helping rid the ocean of a menacing invasive species

When you get in the water, whatever you do, don’t engage,” says Jack Wilde, a veteran naturalist with a ruddy complexion and graying beard. He’s in charge of our group of ten snorkelers, guests at Island Expeditions’ rustic tent camp on Half Moon Caye, 55 miles off mainland Belize.

We’re floating above shallow turquoise water near an unnamed patch reef in Lighthouse Reef Atoll. It’s ironic that my first visit to this heavily protected UNESCO World Heritage Site involves killing. The day is perfect: temperatures in the 80s, few clouds, and brilliant sunshine. But underwater, this reef is under siege by an invasive Pacific predator, Pterois volitans, or red lionfish, and it needs to be eradicated. Our mission on this day is to spear as many as possible.

The story of how lionfish have spread over the past three decades across the entire Western Atlantic region, from North Carolina through the Caribbean to the northern tip of South America, is a cautionary tale of human stupidity.

“The first official lionfish sighting was in 1985 around the Fort Lauderdale area,” says Elizabeth Underwood, the lionfish program coordinator at Reef Environmental Education Foundation (REEF). According to Underwood, “Someone had a home aquarium and dumped a few lionfish in the ocean.” The problem expanded exponentially in 1992, when a commercial aquarium containing lionfish spewed into Biscayne Bay, just south of Miami, during Hurricane Andrew. “Now there are millions,” Underwood says. 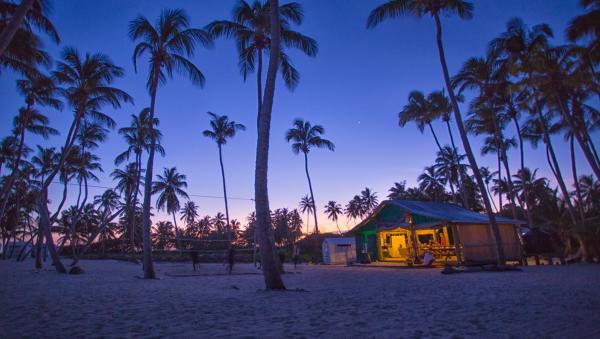 The problem is that lionfish, which average 12 to 13 inches in length and store a protein-based neurotoxin in their sharp dorsal fins, have no natural predators in the Atlantic Ocean. As a result, the fish can hoover up almost anything—more than 80 different prey species have been found in lionfish stomachs. (No human has ever died from a sting, but I’m told that the sensation is akin to being pounded with a giant sledgehammer.)

A full-out war on lionfish has been underway for years in Florida and the Caribbean. Governments, environmental organizations, individuals, and travel companies like Island Expeditions are on a never-ending quest to reduce lionfish numbers. For a short time, the Belizean government even offered a bounty of $25 per head until the money ran out.

"Full eradication is not possible,” says Linda Searle of Belize-based conservation organization ECOMAR. “The goal is to manage and encourage fishermen to overfish them.” Luckily, there’s a growing market for lionfish flesh. Chefs love to fry, grill, and chop the light, flaky, nonfishy-tasting filets into ceviche.

Catching tonight’s hors d’oeuvres as my goal, I start poking into cavernous places to find the little spiny, striped orange monster. But a Canadian boy named Matthew McDermid, on vacation from Vancouver with his parents and little sister, has already cornered one for Pablo Salazar, our 44-year-old Belizean guide. Salazar grew up in the fishing village of Sarteneja and used to sail to this very spot as a 12-year-old to fish with his father.

Today Salazar is about 20 feet underwater, aiming his three-point paralyzer—a spear gun specially designed to kill lionfish—at the graceful, fluttering creature that would be the star attraction in any aquarium. He spears it through the belly. Before our hunt is over, he spears two more.

Back at Half Moon Caye, Salazar filets the biggest of the three lionfish we caught. First, he carefully cuts off the toxic spines with scissors. Then, he slices off the head and tosses it into the ocean. After Salazar cuts a tiny wrasse out of the lionfish’s belly, he filets the rest and presents me with the firm white meat, roughly the size of a fish stick. I run it up to the kitchen and hand it to Oliver Flores, the chef.

The bite-sized hors d’oeuvre is long gone before I can taste it, but after dinner, I ask eight-year-old Kathryn McDermid, an avid vegan because she once saw a salmon die by getting clubbed over the head, what she thinks about killing lionfish.

With its longstanding relationship with many conservation organizations, Island Expeditions is the only company allowed to operate a base camp on Half Moon Caye, a 44-acre protected paradise of white sand, swaying coconut palms, nesting sea turtles, and a rare red-footed booby colony that, in 1928, became the first protected natural reserve in Belize. Days begin with yoga on the beach, followed by sea kayaking, snorkeling, or stand-up paddleboarding and lectures on culture, nature, and conservation. The day ends with a gourmet dinner featuring your fresh-caught lionfish as a starter and grilled red snapper. You’ll get some serious sleep in the elegant seaside platform tent.

Based in Key West, this grassroots conservation organization is the U.S. headquarters of lionfish education. It offers two-hour lionfish workshops where experts explain how to properly collect and handle lionfish, daylong lionfish derbies throughout the Caribbean, and lionfish-eradicating dive vacations to the Bahamas and Curacao.

Aquanauts, based out of Puerto Morelos in the Caribbean state of Quintana Roo, offers one- and two-tank shallow reef and deep dives specifically devoted to culling lionfish. The trips aren’t long, but the learning curve is accelerated because you’ll use a custom, easy-to-operate lionfish spear that ensures the fish’s poisonous spines don’t end up stuck in your skin.

Farther south, Ocean Encounters offers the appropriately acronymed LSD trip (the Lionfish Scuba Dive Experience)—spearing lionfish can be a little surreal, after all. The three-part day includes a classroom lionfish overview, a boat dive, and, if all goes as planned, a lionfish feast at day’s end.