Experiencing the wildlife of Belize is something that should be on top of every travelers list, especially since Belize’s rainforest covers half the country and most of the forest is under government protection. 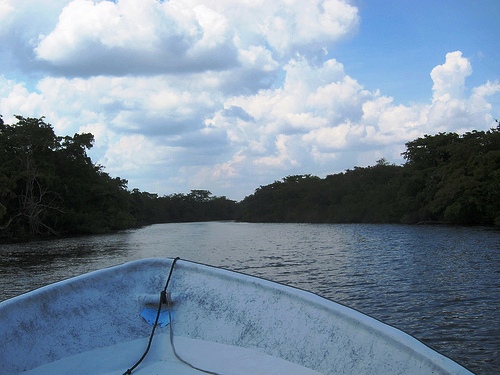 For the adventurous, much of the forest remains unexplored and awaits discovery, but fortunately the casual tourist can enjoy the trails blazed by those who ventured forth before and experience a nature lover's dream come true. Home to jaguars, tapirs and crocodiles, Belize’s rainforest is a world unto itself, unequalled anywhere else on the planet. Over 500 identified species of birds fly through the rainforest, living in its trees and burrows on the ground. Thousands of plants and tropical flowers grow in the wild, including a staggering 250 types of orchids and 700 species of trees. From wildcats to colorful birds to exotic plants and waterfalls cascading thousands of feet into clear pools, there are many exciting wildlife discoveries for you each and every day.
Meet 8 unique wildlife of Belize:
Jaguar 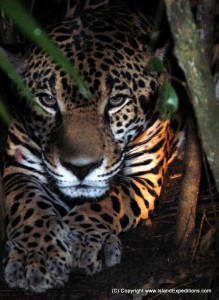 At one time, there was concern that the Belize jaguar population was at risk. Fortunately, the jaguar has been found roaming much larger areas than originally thought, which will ensure the jaguar population, does not dwindle due to inbreeding and isolation. While dwindling populations is still a concern, this fact that the jaguar moves about gives hope that the species will be around for a long while. The jaguar is a member of the panther family of big cats, and is the third largest cat next to the lion and tiger. A potted coloring on its fur makes it hard to see in the jungle, as it is camouflaged effectively against the jungle backdrop. Once in a rare while, the jaguar will be mostly black but the spots can still be observed when close to the cat. A rarity amongst cats, the jaguar likes swimming and will often be seen around water sources. A solitary creature, the jaguar hunts by stalking and ambushing its prey. Female jaguars can give birth to up to 4 pups and will care for the pups until they are a couple years old. Typical lifespan for the jaguar is 15 years, though they can live much longer in captivity, though not as happily as their brethren who run free in the wild.
Scarlet Macaw 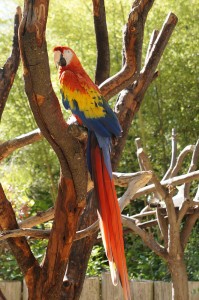 The Scarlet Macaw is a large colorful bird, with bright red blue and yellow feathers decorating a head to tail length that can be as long as 32 inches. While captured and kept as pets in many parts of the world, the Scarlet Macaw is protected against being bought, sold, traded, or used in any commercial project without specific permits in place. While these marvelous birds can live up to 50 years in captivity compared to 30-40 years in the wild, the Scarlet Macaw lives a much richer and fuller life in the jungles than locked up in a cage. A tour through the Belize rainforest will let you witness these incredible creatures in their natural habitat, flying through the air and squawking about their territorial rights.
Baird's Tapir 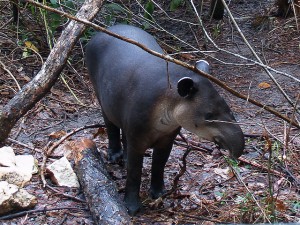 The Baird's Tapir is the national animal of Belize. Called the mountain cow by locals, the Tapir looks like it could be related to an elephant because of its large nose, but it is actually related to the rhinoceros and the horse. The Tapir is a herbivore that spends most of its time foraging for food, feeding on fruits, berries, grasses, leaves, basically any plant it can get into its mouth, include water vegetation. Excellent hearing and sense of smell make up for its poor eyesight. Up to six feet in length and standing about three feet tall, the Tapir can weigh up to 600 pounds. Hunting this wildlife is illegal in Belize and there are large forest reserves specifically set aside to ensure the survival of these magnificent creatures.
Jaguarundi 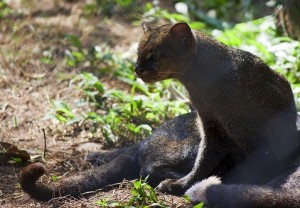 Looking more weasel than feline, the Jaguarundi is a ferocious wild cat not much larger than a typical housecat. Growing 21-30 inches in length and weighing 8-20 pounds, the Jaguarundi has been called the "otter cat" because of its resemblance to the sea mammal. Active during the day, it feeds mostly upon rodents, reptiles and birds, though they can catch and kill rabbits and opossums, when other food is scarce. The Jaguarundi is closely related to the puma and cousins of the cheetah.
Ocelot 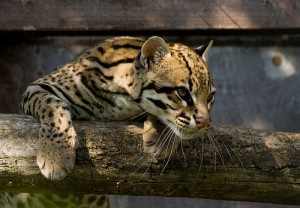 The ocelot is one of the smaller "big cats" and is sometimes referred to as a "dwarf leopard". Measuring up to three feet in length and standing about a foot and a half at the shoulder, the ocelot can weigh anywhere between 25-35 pounds. Black spots on its fur are reminiscent of the jaguar's spots and helps hide the ocelot when it is stalking prey or hiding from enemies. The ocelot feeds mostly upon small mammals, reptiles, amphibians, fish, birds, and crabs. It is an excellent hunter with exceptional eyesight, including enhanced night vision due to the white rings around its eyes reflecting light into the eyes at night.
Kinkajou 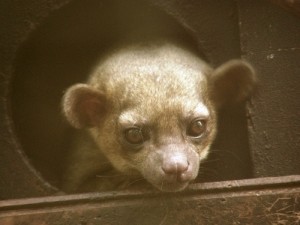 The Kinkajou is a nocturnal animal that lives in the upper world of the forest. Very agile and extremely fast, the Kinkajou travels from tree top to tree top using its long tail for balance and hanging about. Feeding on mostly nuts and berries, the Kinkajou will eat flowers for nectar when the dry season is upon Belize. These cute creatures look like a cross between a cat and a monkey, and handle the same kind of role in the rainforest as raccoons do in temperate forests, that of pollinators and seed dispersers. Sometimes referred to as "honey bears", the Kinkajou has a body about 16-22 inches long, with a tail of the same length, and they weigh between 4 and 10 pounds.
Black Howler Monkey 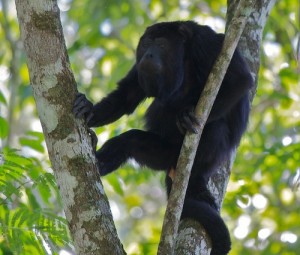 The "Baboon" is what locals call the Black Howler Monkey. These primates live loud and large, growing up to three feet in height with a tail to match and weighing about 15 pounds, the Black Howler Monkey gets its name from its very loud guttural howls that it yells out to mark its territory. They tend to stick to the tree tops but have been known to wander around at ground level from time to time. Living in troops of four or more, the Black Howler Monkey will wake up with the sun and let others know it is awake the same way a farm rooster will crow with the rising sun. Unlike the rooster, however, Howler Monkeys will also announce the impending sunset with loud yells, and sometime even warn of incoming rainstorms with the same loud bellows. Strong swimmers with excellent vision, the Black Howler Monkey maintains a territory of anywhere from 3-25 acres.
Spider Monkey 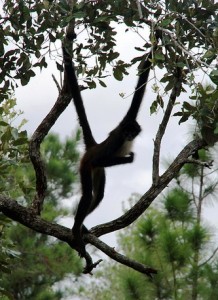 Like the Black Howler Monkey, the Spider Monkey lives in the upper areas of the forest, preferring the safety of the canopy over the dangers of the ground. Long limbs and a prehensile tail (which they use more often than their own fingers), the Spider Monkey is agile and moves through the tree tops with the grace of a trapeze artist. Being social animals, the Spider Monkey will live in bands 30 or more, but will go foraging for food in smaller groups. Considered very intelligent by standards of primate cognition, the Spider Monkey can vocalize many sounds, each with specific meanings to other Spider Monkeys. The Spider Monkey has even been witnessed crushing leaves and mixing them with saliva and bugs and smearing it on their skin as a form of bug repellant. The Spider Monkey diet consists of nuts, berries, leaves, and eggs. When food is scarce, they will eat bark and insects.

Now that you’ve learned about these unique wildlife found in Belize, which is your favorite?