The Life of a Caribbean Spiny Lobster 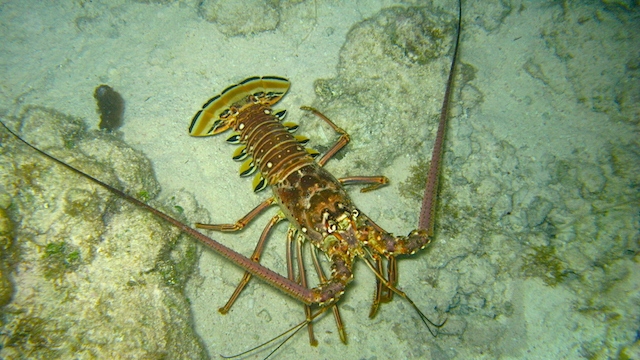 The Caribbean Spiny Lobster (Panulirus argus) is the primary lobster caught in Belize. When the Spiny Lobster hatches, it faces an uphill battle.  Of the 10,000 eggs that a female might release, only about one percent will survive past the first four weeks of life. They begin life as a free-swimming, microscopic phyllosoma larvae.

After about one year, the larvae settle in algae, in sea grass beds or among mangrove roots. After undergoing several molts, (it sheds or molts its shell up to 25 times in the first five years of life) they migrate to the coral reefs and live in holes or crevices. Once the lobster becomes an adult, the molting event decreases to once a year. Molting the old shell and creating a new shell accommodates the growing lobster for at least another year.

After the shell is shed the lobster proceeds to eat its own shell and then hides for at least two weeks to allow its new shell to harden. It is during this short period following the molting that the female lobster is receptive to mating.

After mating is completed, the female stores the sperm for several months until she finally fertilizes and lays her 10,000 to 20,000 eggs. After an additional 9 to 11 months, the eggs will hatch.

During its lifetime, the Spiny Lobster will eat a wide variety of foods consisting of clams, mussels, crabs, and worms, and occasionally plants.

Along with true crabs, prawns, and other lobsters, the Caribbean Spiny Lobster is a decapod; it has ten legs. Its spiny exoskeleton that provides some protection from potential predators.  The Spiny Lobster remains the favorite prey of many species, including Nurse Sharks and Nassau Groupers.

Lobster is considered a commercial species and a fisherman’s license is needed to trap and catch these crustaceans. Fisherman must follow the Belize Fisheries Department legal requirements for minimum weight and size. Individuals or restaurants with lobster below the minimum prescribed sizes will be charged for being in possession of undersize lobster.

During the closed season from February 15 to June 15 it is illegal to fish, attempt to fish, possess, buy or sell any lobster or lobster products. This time is given to allow lobster populations to breed.