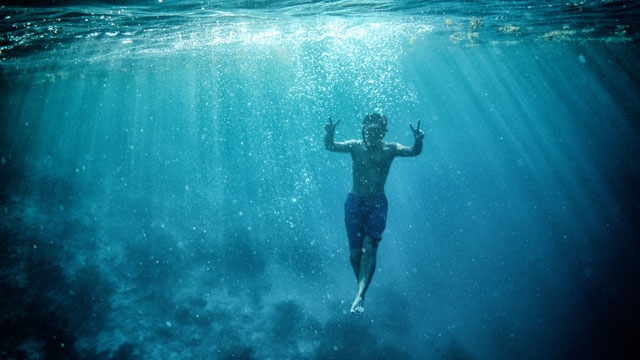 One of the highlights for guests staying at our Lighthouse Reef Basecamp on Half Moon Caye is snorkeling and kayaking around the rim of the legendary Blue Hole.  The Great Blue Hole was made famous by French ocean explorer Jacques Cousteau. He brought his renowned research ship, the Calypso, to investigate the depths of the sinkhole in 1972. The expedition found some submerged stalactites in the hole, and was able to conclude that the Blue Hole was formed before ocean levels rose.

Cousteau recorded his trips on the TV series The Undersea World of Jacques Cousteau. Here is the episode when he visits the Blue Hole at Lighthouse Reef. This is fascinating to watch if you want to learn more about the incredible Blue Hole in Belize.

The Great Blue Hole – Location and Facts
The Great Blue Hole lies near the center of Lighthouse Reef Atoll approximately 70kms from the mainland coast of Belize. Part of the Barrier Reef Reserve System this UNESCO World Heritage Site is one of Belize’s most featured attractions. This massive ancient underwater sinkhole is surrounded by reefs, caves and several species of fish including bull shark, hammerheads and midnight parrot fish.  It is ranked one of the top ten dive sites in the world and is a ‘bucket list dive’ for many scuba divers.

Jacques Cousteau is widely associated with the Great Blue Hole. As well as being a legendary ocean explorer, Jacques Cousteau was a French naval officer, conservationist, filmmaker, innovator, scientist, photographer, author and researcher. His long list of accomplishments include the following:

A Pioneer of Scuba Gear

Along with engineer Emile Gagnan, he co-created the Aqua-Lung, a twin-hose underwater breathing apparatus. With the Aqua-Lung, Cousteau and his crew were able to explore and film parts of the ocean depths that had never been seen before.

A Pioneer of Underwater Base Camps

Along with his team, he created the first underwater habitat for humans Conshelf I and later Conshelf II and III. The habitats could house working oceanauts for weeks at a time.

Cousteau was born in 1910, in Saint-André-de-Cubzac, France and died in1997, in Paris, France. The Cousteau Society , founded by Cousteau in 1973, now has more than 50,000 members worldwide.  Today, his society continues the unique explorations and observations of ecosystems throughout the world, helping people understand and appreciate the fragility of life on our Water Planet.