Honeymoon (hony moone). Dating from at least the 16th century, the term refers to the supposedly fleeting swiftness of the joy of a new marriage, sweetness fading like the waning of the full moon. For my wife Sue and myself, our first honeymoon was wonderful but it was in Quebec City in the middle of winter (with just as much snow and ice as you may imagine – cue igloos and dogsleds). Twenty years and two children later, we decided we wanted to get away by ourselves again for a second honeymoon but maybe to someplace with less snow and ice. Adventure (auenture). Dating from the early 13th century, the term can describe a unusual or exciting event, usually with some degree of personal risk, which can lead to growth, change and self-understanding. One of the best parts of a long-term relationship is experiencing life together and then sharing the different perspectives that we each have about the events. So we knew that in addition to some time away, we also wanted something different, an adventure somewhere off the main tourist byways. In the course of our research we came across a Canadian company called Island Expeditions that was organizing adventure tours in Belize. After some deliberation (pretty short after seeing pictures from Belize), we decided to spend three weeks in the country, with the Island Expeditions tour of Glovers Reef in the middle of our itinerary. So in the early part of 2006 we "loaned" the kids to the grandparents and set off to celebrate our anniversary by sharing an adventure together. At this point, I could go into great descriptive detail about the wonderful rainforests, reefs, culture, wildlife and other aspects of the diverse country of Belize, but I would rather describe to you some strong impressions that remain with us almost five years after the fact. A night inside a screened hut – at first I assumed that the unbelievably loud primal sounds of the rainforest would keep me up all night but instead they soothed me into the deepest sleep in years. Feeling proud about setting ourselves afloat for the first time ever in a dual kayak – and then being informed that the first activity was to deliberately overturn said kayak in 10 feet of water and demonstrate how we would get back into it. Supposedly part of emergency preparedness, it actually turned out to be a surprisingly effective exercise in marital conflict resolution. After unnamed person "A" dumped themselves and unnamed spouse "B" back into the water while trying to follow B’s boarding instructions, our guide Alex could not keep a straight face any longer. When "Roc" indicated that not only would he take some of us fishing in a small powerboat with primitive gear but we would need to wheelbarrow to unload the fish, some of the more "experienced" fishermen in our group of tourists scoffed. As the boat returned to shore a couple of hours later, Phillip the cook shouted out "Yo, Roc, you need the wheelbarrow?" Receiving an affirmative answer, Phillip ran down to the shore with the wheelbarrow to unload the bountiful catch, later turning the massive grouper within into possibly the single best seafood dining experience we have ever had. Everyone in our group, regardless of physical condition, taking part in morning yoga on the beach and performing sun salutations while the sun rose on schedule over the ocean. 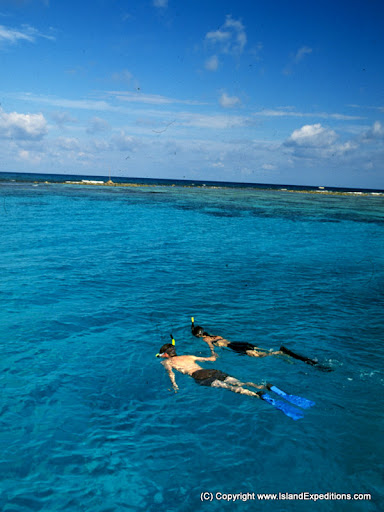 After getting a lesson in Garifuna drumming and practicing looking foolish dancing in the sand – reclining on beach chairs watching the endless stars get brighter as the fire died to embers. Heading outside the reef wall to snorkel on a calm day and seeing the reef wall drop away into the black nothingness of the deep ocean – an image that still sometimes crops up in my dreams. At a ranch in the forest, lying in a hammock on a tiled patio covered with flower petals after dinner, giving up reading in the failing light, and drifting off to the sounds of a language lesson a group of women in the next room were having – a mingling of the wildlife hum and the soft sounds of a foreign tongue. Dinner at a local household in Dangriga - on the rooftop wrapped in hospitality and surrounded by new friends – sharing the experiences of those friends – some talking about the incredible snorkeling experiences, finding seahorses and queen conches, sailing in kayaks on the ocean, watching the sun set, some remembering how our incredible guide Mike taught a fish to fly, some feeling the winds of change now that they were disconnected from the grid, knowing new things and coming to decisions... And most importantly for us, Sue and myself growing together, learning together, laughing together, a second honeymoon to renew our commitment to a life together, truly the adventure of a lifetime in Belize.