The Great Blue Hole - A Natural Wonder
On this Belize vacation we will be sea kayaking out to the Lighthouse Reef Atoll in Belize's Barrier Reef just six nautical miles north of Island Expeditions' Basecamp in the Half Moon Caye Marine Reserve. 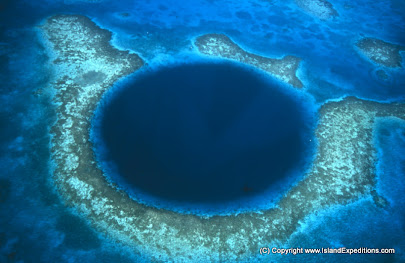 You know the song that goes: “There's a hole in the bottom of the sea...”? It's true. A few thousand years ago the sea level was much lower, and what is now Lighthouse Reef was an island back then. Over the years a huge cave formed in the limestone rock beneath this island. Eventually the roof of the cave got so thin it collapsed, forming a huge sinkhole. Sea levels rose after the ice age, drowning the whole thing. So now there is a hole in the bottom of the sea. There are a few of these submarine holes globally and it is because of the contrasting blue water (dark blue above the cave and clear aqua blue in the surrounding shallows) that they are called, you guessed it: Blue Holes.

Travel packages to Belize attract scuba divers from around the world. They come to see the gigantic formations of stalactites, stalagmites and yawning caverns in this famous Great Blue Hole. But it's sea kayaking and snorkeling along the coral reef that surrounds the hole that is the great attraction for us today, and this morning there is a southeast wind to help us on our way.

The local guides give us a quick beach lesson on how to sail one of Island Expeditions' unique sail-rigged sea kayaks, and we are soon underway. Sails flying, the kayaks quickly spread out as we follow the eastern reef crest, and we are soon cruising over the white sandy bottom. Stingrays, disturbed by our shadow, dart off at incredible speed, in a cloud of dust. The waves crest and break on the reef, casting a purple haze in the air, and a distant object, looking like a crashed UFO, turns out to be a section of a ship's  hull, wrecked on the reef many years ago. At this landmark we begin to angle in towards the atoll. We're heading for our support skiff, which is anchored by the Blue Hole.

The kayaks all sail in a line and tie up behind the skiff. After a quick snack, we get our snorkel gear on and slip into the water. Our goal is to follow along the inside edge of the reef, snorkel around in a big circle, and end up back at the anchorage.

We can really see how the corals grow upward, reaching towards the light, until they reach just below the low tide mark. From under the surface, the top of the reef is a densely-packed garden of soft corals. Below these soft corals are all the hard corals, loosely stacked in a vertical wall about 15 – 20 ft. (5 or 6m) deep. The seabed slopes steeply from there to the rim of the hole, which appears like the edge of the world as it suddenly drops to a depth of 410 ft. (130 m).

The Lighthouse Atoll Reef harbours a great variety of inhabitants. We find open-water fishes here, such as creole wrasse and ballyhoo. Large parrot-fishes and various groupers lurk above the ocean floor. And hiding among the corals are too many varieties of fish to name.  Our sighting of the indigo hamlet, with its irregular bars of white, light blue, and dark blue is a rare treat. And the best sighting of all - a hawksbill turtle!

Soon we are back at the anchorage and climb aboard our skiff to share a delicious lunch and talk about what we've just seen. After lunch, we prepare to sail back to Half Moon Caye, now a barely visible smear on the horizon. The kayaks set out one after another and soon form a long line of white sails, following the reef to our island home, the Island Expeditions' Basecamp in the Half Moon Caye Marine Reserve. 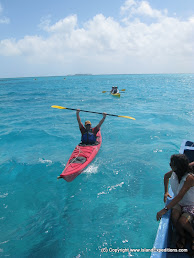