A Gale Visits Half Moon Caye, on Lighthouse Reef, Belize

A Gale Visits Half Moon Caye
They call it “hard breeze”, when the wind comes up. And there is plenty of wind this far out to sea. 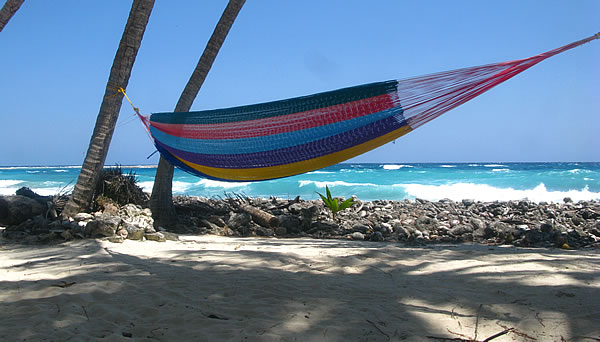 Half Moon Caye sits perched fifty sea miles out, on the edge of the wide-open Caribbean Sea; one last shelf of land standing on the brink of the Cayman Trench, some several kilometres deep. The NE trade winds blow steadily here, except when winter cold fronts push into the area. When that happens, the winds go light, shift around to the South, and just before the front hits, the wind goes silent. Then it blows hard from the NW, for a few hours, or sometimes, a few days. We are lucky here at Island Expeditions base-camp: we are exposed to the SE, but well sheltered from the NW by tall coconut palms.

When a cold front hits, you don't notice the lack of wind: instead you are suddenly aware of the loud crashing of the surf. It was there all along, but always partly drowned out by the wind rustling the palms, sighing through the door and windows of your tent. Now the tent is still, the palm leaves are at rest, and the waves boom onto the shore, and rattle the cobbles as they push them up the beach and suck them back out to sea. I find it hard to sleep, so I wander to the front of camp and look out on a moonlit sea. 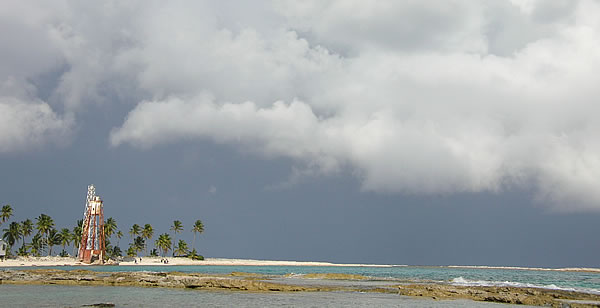 The waves have smoothed into long swells; perfect sine waves curving around the point, with silver crests and leaden troughs. The sky is starry to the south and east, but I notice behind me, to the northwest, there are no stars, just a menacing black emptiness, like a hole in space itself. I head for my tent. As I reach the tent I hear the storm coming. There is no flash of lightning, no crackling of thunder, but a roaring of wind, coming in fast. The wind hits hard, and so suddenly it is a shock. I see the trees bending low before the force of it. It seems they must be shocked too, awoken so instantly.

It blows so hard I can't guess its force or speed, except by the fact that the air is filled with fragments of leaves, torn from the trees. As I drop the last of my window flaps, the rain comes down in sizzling sheets of dense drizzle. This is not a tropical rain, with big drops like gumballs drumming on the tent roof. This rain is fine, dense, chilling. It slants to Earth diagonally and makes a buzzing sound on the roof and wall.

The roar of the wind continues unabated for a while, and then, as quickly as it began, the rain stops. When that happens, the wind does something I have never experienced in a storm. It blows and stops, blows and stops, like a giant taking a huge breath before blowing on us mortals like we were tinder and he were trying to start a fire. The blowing pushes the trees down toward the earth. Then they spring back as the giant takes his next breath. Then they are blown over again. This springing back and forth is too much for some of  the trees and they start to snap and fall around us. One comes down with a huge crash, barely missing my tent. If it were a few feet taller it would have landed square on top of me. As strong and solid as these tents are, this is too much for me and I dash over to the shelter of the dining hall. Here I am surrounded by big trees, but I am confident the heavy timbers of this structure will keep the trees off of me.

As the storm blows through the night, more trees fall. When the winds begin to abate, I take a walk through camp. All tents seem to be okay, and not one cry was heard throughout the night. Eventually I sleep. 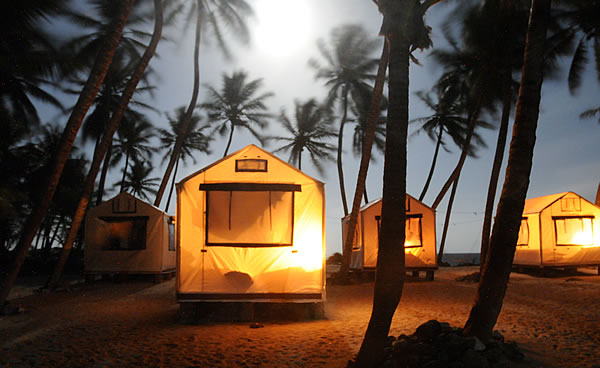 By daylight the wind is reduced to a steady breeze, still from the NW, so all is calm in camp. The white sand, so meticulously groomed by Javier, is covered in leaves, coconuts and other plant debris. Chairs were blown over, but all tents are standing. Sort of. We soon discover that the last tent, a family-size structure, had been indirectly hit. All the trees in camp are tilted, the result of some hurricane of long ago. One of the trees came down on, and slid along the sloping trunk of another, which happened to be tied to a tent. The fallen tree knocked into the side of the tent, and pushed it off the short posts on which it stands. The people inside felt a mighty shake and then the whole structure dropped a foot or so and settled on firm ground, otherwise unharmed. So they bravely went back to sleep.

As the staff hustled to clean up the grounds, and restore everything to its rightful place, the guests came to us and asked “Do you have any more rakes? Do you have another wheelbarrow? What can we do?” I was pleased to see such a response, to which one replied “Well. It's our camp too , you know!”. This is when you know, that you are working in the right place, with the right kind of people: everybody pulled together and not a single complaint was heard.

Within two hours, the tent was restored to its posts, and the whole place was cleaned up. Except for the fallen trees, you would think it had been a dream, and never really happened. There was a lot of excited talk over breakfast, as people told their tales of the stormy night. Such events have much to teach us, about ourselves, and of the forces of nature. And they leave us with great stories of our adventures in Belize.