Detroit News – Greg Tasker. ‘The Belize Zoo is a Hoot at Night’

Travel Blogger Greg Tasker joined our Paradise Islands trip for a lodge-to-lodge paddling and snorkeling adventure on the Southern Barrier Reef.  Here is his article about the nocturnal tour of the Belize Zoo which he did on the first night of the trip.  This specially arranged night zoo tour is optional by donation and is also available on these trips:

Glover’s Reef and River of Caves

The Belize Zoo is a hoot at night

Howler monkeys whoop it up somewhere high in the surrounding trees, their loud barks piercing the still night. Nearby, a jaguar roars, its chesty cough adding to the eeriness of the dark jungle.

Only our guide’s flash light cuts through the blackness, illuminating the narrow path, framed by thick walls of brush. Red eyes stare. It’s just another night at the Belize Zoo, home to more than 125 animals native to the Central American country, many of them endangered. Because most of them are nocturnal, night is the best time to see them.

And we do. Jaguars. Pumas. White-tailed deer. An American crocodile. And tapirs, also known as mountain cows (although they’re shaped like pigs but with longer snouts).  The cool thing about this preserve is the animals live in their natural environment. No manmade habitats; they’re simply fenced in. You can literally reach out and touch them, though plenty of handmade signs advise you not to do so.

Our guide extends his hand to offer bananas to a tapir and later feeds a rare black jaguar, who was rescued after being found nearly starved death in a cage at a resort a few years ago. Lucky Boy, as he’s been named, has been rehabilitated and he looks pretty healthy now, and definitely not an animal you’d care to cross in the jungle. 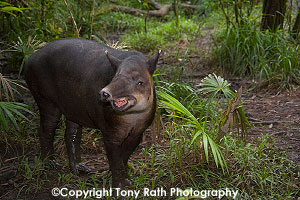 The animal park traces its beginnings to a Spanish documentary filmed in Belize in the 1980s. When the film wrapped up and the crew left, the animal care taker stayed behind and created a makeshift zoo. Today, the Belize Zoo is spread among 29 acres and is home to only native mammals, reptiles and birds; none were captured in the wild. Instead, they’re like Lucky Boy – rescued from abuse or neglect — or have been donated or relocated from another zoo. The mission is to educate the public about Belize’s wildlife and to encourage protection of the country’s natural resources.

I happened upon the zoo while staying at the neighboring Tropical Education Center the night before beginning a five-day kayaking excursion in the Southwater Caye Marine Reserve with Island Expeditions. As a part of the zoo, the Center is used to raise awareness of wildlife conservation and offers tourists, students and researchers the chance to lodge in a wild savannah landscape by staying in tent-topped cabanas. Island Expeditions, a Canadian adventure company, begins a number of trips at the Center and donated and built the cabanas and washroom facilities. Staying overnight in cabanas in the jungle complemented the kayaking adventure.

Let it be known that I’m no zoo goer (and had to be pressed to join this tour), but the Belize Zoo is a hoot, definitely worth a visit – day or night. I’ve never really visited another one quite like it.