Caye Caulker’s cave is possibly the largest in the world!!! | Island Expeditions Skip to main content

Caye Caulker’s cave is possibly the largest in the world!!! 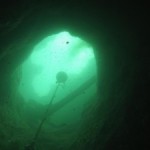 Here is an interesting story about the cave at Caye Caulker, which could possibly be the largest marine cave in the world!

Caye Caulker's cave is possibly the largest in the world!!!

Caye Caulker could possibly be sitting on the LARGEST MARINE CAVE IN THE WORLD!!! It’s a big statement but something that the well regarded National Geographic will take their time to explore in 2014, along with the elite in the dive world, lead by James Petersen or ‘Chip’ from Belize Dive Service and his team of researchers!!

Although many of us have been unwittingly sitting on this cave for most of our lives, the recent developments for the cave will prove monumental for the Caye – the increase in visibility on the dive map as experts and tourists alike will flock to see this unique natural beauty. Not forgetting the impact this will have on the earth science world (biologists, hydrologists, archaeologists etc) as this cave acts as a time capsule preserving life forms and conditions of a more ancient earth. And finally giving Caye Caulker global recognition for a truly magnificent natural marine creation as unparalleled as say Niagra Falls or the Grand Canyon!!  Caye Caulker's cave is possibly the largest in the world!!!

The story so far is this … the cave was first explored back in 1981 when the first owners of Belize Dive Services Paul Heinerth (to this day an International cave diving pioneer and author of many books on the subject) and Chuck Hattel dug into the cave. Frank Bountain took over the shop shortly after and amounted over 500 dives in the cave itself – thus becoming the person who has dove the cave most to this date. These pioneers amassed significant initial information that included basic mapping and even documented research.

Frank left Belize Dive Services in 1995 and from then there was no active diving undertaken in the cave until November 2012 when Chip Petersen and Bill Oestreich ‘Bert’ – both recognized Cave Dive Instructors entered the cave once more. Chip and Dani Petersen bought Belize Dive Services back in 2009 and have already been contributing to the longevity of our marine environment by funding the Belize Shark Project. Chip’s real dream in purchasing BDS was to follow the footsteps of his predecessors and access the cave system to allow Belize to realize the potentials of this natural beauty so when his mentor, Bert, turned up on Caye Caulker he seized the opportunity.

So to date, Chip, Bill and Marty O’Farell from San Pedro (all qualified and heavily experienced Cave Divers) have been re-tracing steps. Chip has been given approvals and in particular the Permit by the Department of Archeology and the Environment the for surveying, mapping and scientific research in the caves of Belize. Together they have been making accurate surveys through computer technology and thus far verifying and giving greater accuracy to the original data.

In the years and months to come the cave will attract the elite in the dive world to come and see for themselves this natural treasure of Belize (and indeed Caye Caulker!!). From a commercial perspective, Chip together with the Village Council Chairman Alberto Villenueva, has pushed for the area between and including Tarpon View and the caves as a mini reserve – co-managed by the Village Council and the Dept of Archaeology. Their aim is that a significant proportion of the profit of the reserve lies firmly in the hands of Caye Caulker and not, like the Caye Caulker Marine Reserve or even the Hol Chan Marine Reserve, monies are used elsewhere by the Government!! This means that the money goes back into the community that it serves ie Caye Caulker!!

Chip is anxious that Belizeans get involved in the cave but stresses the dangers for those diving the cave. All divers must go through a 15 day course to learn the specifics and skills of Cave Diving before accessing the cave. Safety concerns are essential for those without the capacity to use the specialized equipment and techniques. Experienced divers are the most frequent divers to lose their life in cave diving – this was illustrated by 2 lives being lost in this same cave back in 80′s – this is a situation which Chip very much wishes to avoid!!

For this reason the Belize Cave Diving Society has been established to promote safe and responsible cave diving in Belize. Rules for guiding will be based on established methods used worldwide and a Cave Management Protocol created for all cave divers. For more information please look on Facebook for updates on information as and when they have it!

This news of our hidden gem underneath Caye Caulker is indeed welcome news to all that care for her and indeed Belize – that which we know already and the possibilities are enormous and truthfully beyond what we can imagine at this point. It is causing a great deal of excitement for those connected with it and we applaud all those who have actively taken their part in making this dream become a reality!!