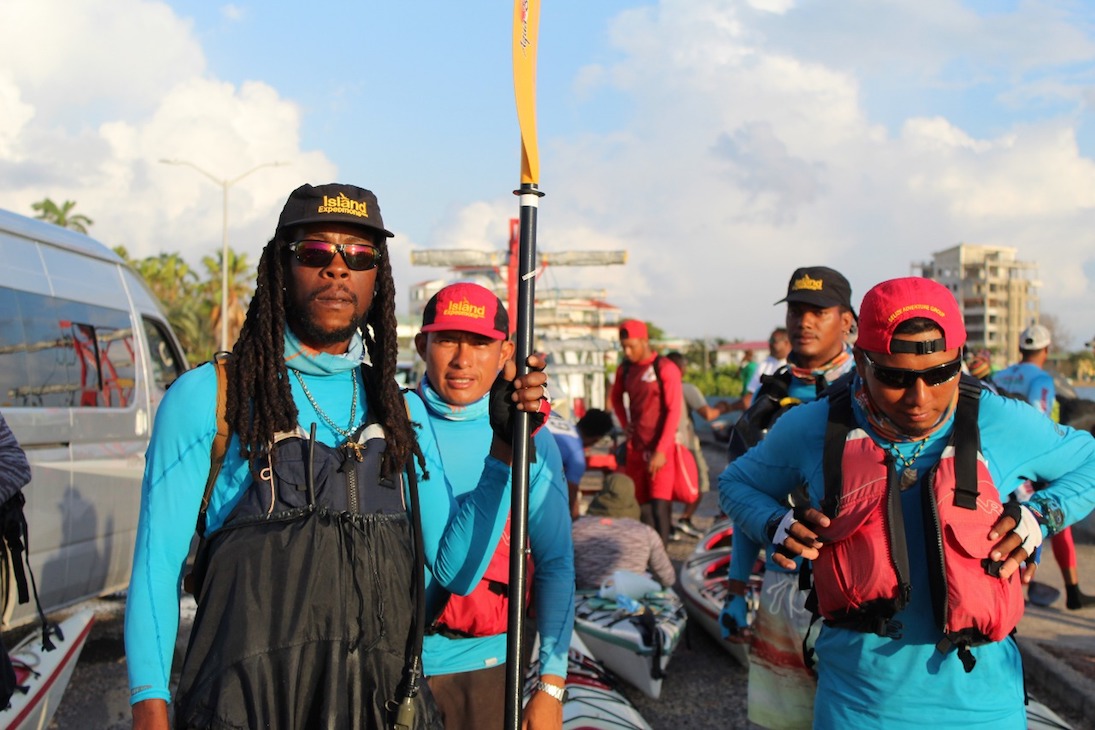 Congratulations to all the teams who recently completed the Belize Tourism Board (BTB) Love Belize Sea Kayak Challenge!

This was only the second time this event has happened - the first being last year.

We wanted to share this race report from the Island Expeditions Team:

The event took place over 6 days from Punta Gorda to Corozal in excess of 215 miles.

On Tuesday the 21st May the Paradise Casitas & Island Expeditions team and the support team of Andy, Rio, Phil and Milkman set off for Punta Gorda.  The meeting place was Garbots Marina, Punta Gorda.  At this location, the support team issued the kayaks and equipment. The race team tried out two of the kayaks they had set aside for themselves to use.  They would have to select one by the end of the day as the team of 4 would race relay-style in one kayak. By 6 pm the race brief had taken place and the kayaks had been tested by all teams. The kayaks were then loaded onto the trailer ready for the morning.

That evening the teams were invited to join the Opening Ceremony which was a motorcade through the streets of Punta Gorda then an introduction of all the teams at the town square.  After that it was off to bed  - the team stayed in the PG sports complex.

The race started at Fisherman's Dock in Punta Gorda.  A reasonable size crowd saw the teams head off in calm seas.   Budge and Keon took the first leg and but by the time they reached Avalon Caye they were well at the back of the field.  Venancia and Juan were next and pulled back a few places as the seas started to lift first to 20 knots then by the time Keon and Budge took the boat back at Monkey River it was 25 gusting 30 with some substantial waves.  The finish for that day was supposed to be Tipsy Tuna in Placencia but only 6 teams managed to get to the take out as the weather really was poor.  8 of the teams including Island Expeditions needed to be pulled off as night fell prior to reaching the take out.

This was a very late night for everybody, especially the support teams who were waiting for boats to come in well after 9:30pm - with the 4 am starts it added to a long day.

The race was supposed to be from Placencia to Dangriga via Riversdale and Hopkins but some of the teams were uncomfortable to race due to the poor weather they had experienced the previous day.  The committee pulled all the teams in and they chatted about what to do.  They voted to go to Hopkins to re-assess.

The teams made their way to Hopkins town pier by 10 am.  At midday, the weather was judged to be fine to race to Dangriga.  Venancio and Juan did this leg and came in a respectable 8th place.  Wasani and Lynn from the Island Expeditions office turned up to support the team. On arriving at Dangriga almost half the teams capsized coming into the beach over the breaking waves. 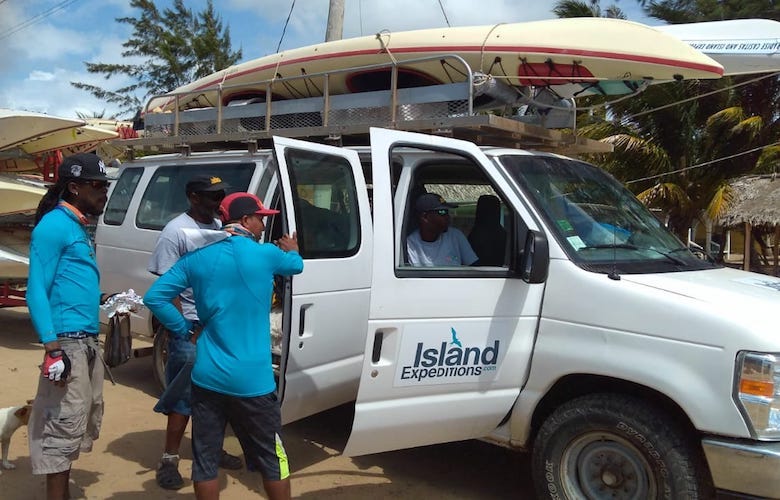 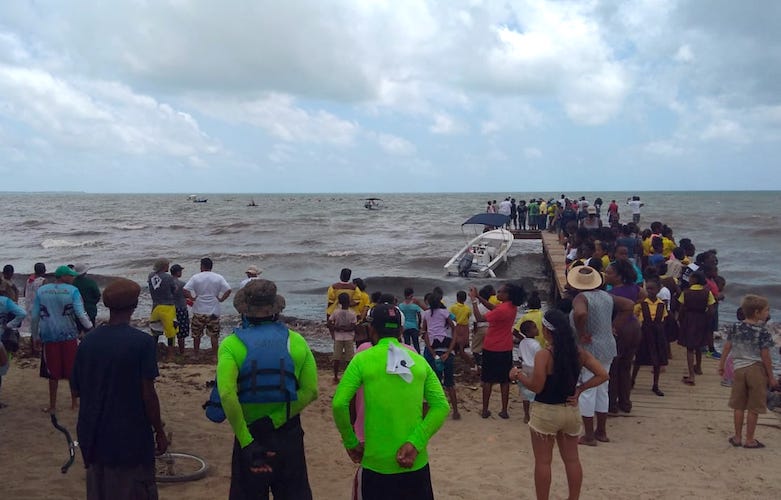 This was a very testing day for the Island Expeditions team.  The route was from Dangriga to White Ridge to Belize Coast Guard then into BTL Park.  It started well, Budge and Keon pushed hard and came in 4th at White Ridge.

About 5-8 miles into the next leg Juan suffered massive muscle cramps in his shoulders and could not paddle on. He could not paddle anymore and had to sit in the boat, whilst Venancio paddled 12-15 miles on his own in a double kayak.  If he had not completed that leg we would have been pulled out of the race. Venancio managed to continue and only dropped from 4th to 7th place by the time he reached the coast guard station.  Budge and Keon then paddled the last 5 miles hard and managed to get the team back into 5th place by the time they got to the finish line at BTL park. 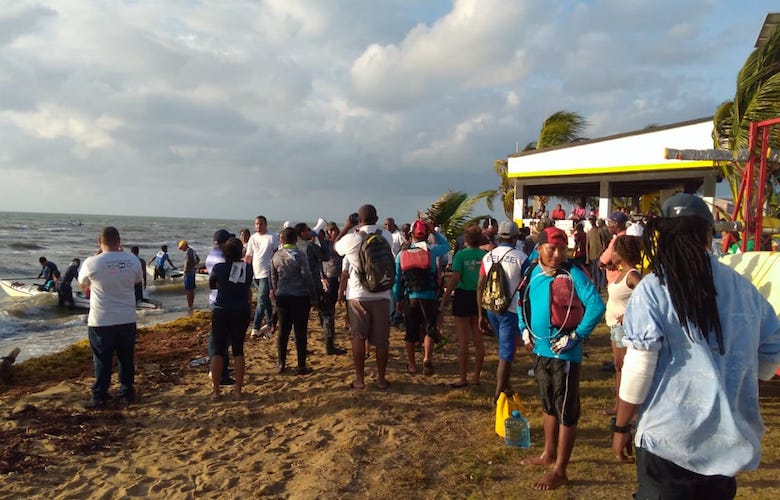 On this day the support team split up after the start, Phil and Milkman went to St Georges Caye whilst Andy and Rio headed to Sarteneja with the vehicle and trailer via Orange Walk.  The paddlers headed to San Pedro via St Georges Caye and Caye Caulker.  After a great start, Keon and Budge paddled the leg to St Georges Caye and arrived in 6th place. Venancio and Juan then set off for Caye Caulker but were in 8th place by the time they got there.  By the end of the day, Budge and Keon had clawed back a couple of places to get the team back to 6th position. 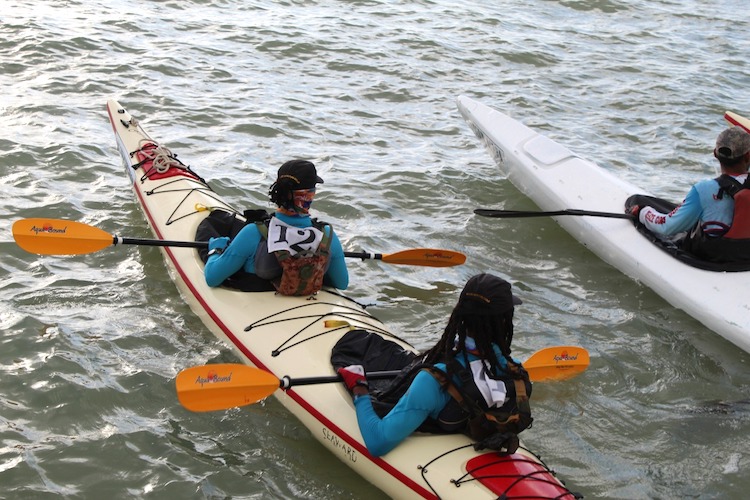 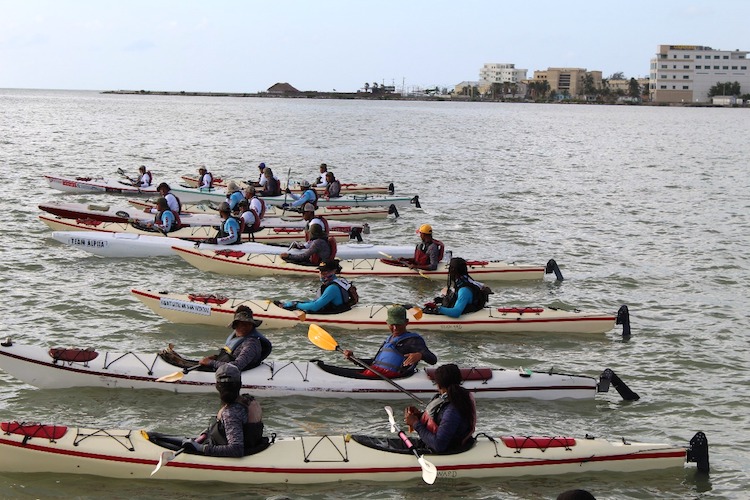 The race team set off from San Pedro via Blackadore Caye to Sarteneja.   Keon and Venancio took the first leg and ended up in 9th place.  Budge and Juan pulled some places back and were running in 5th place when Budges back went into spasm 5 miles out and he had to be taken from the kayak and brought in to Sarteneja.  This left Juan having to paddle 5 miles in a double on his own to ensure the team could finish the race. Unfortunately, they slipped back to 9th place again by the time Juan crossed the line.  A valiant effort by him showing true metal to push on until the end.

Today was the final sprint from Sarteneja to Corozal.  The race started at 10 am with Venancio and Keon.  The team finished in 9th place on the day.

Both the support and race teams did an amazing job.   The racers performed admirably -a great individual and team effort.

Thank you to the Belize Tourism Board (BTB) Love Belize Sea Kayak Challenge for organizing this incredible event. We were proud to participate and support this event. 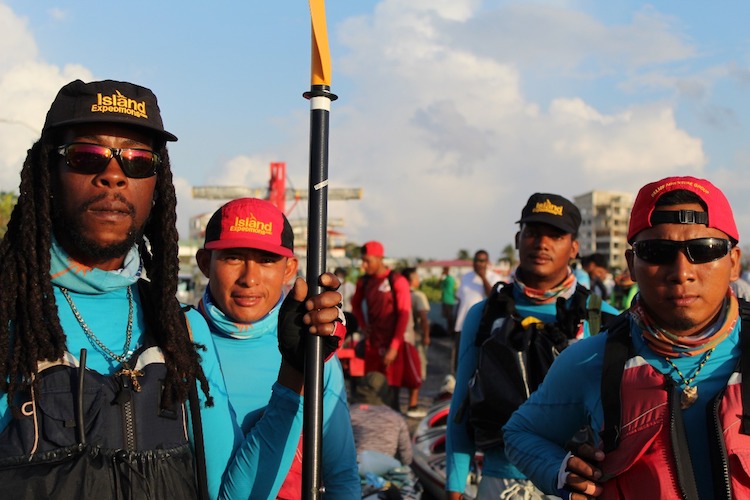 Are you looking to plan a sea kayaking trip to Belize?

Call at 1.800.667.1630 or email info@islandexpeditions.com for more information and to plan your Belize sea kayaking adventure trip.