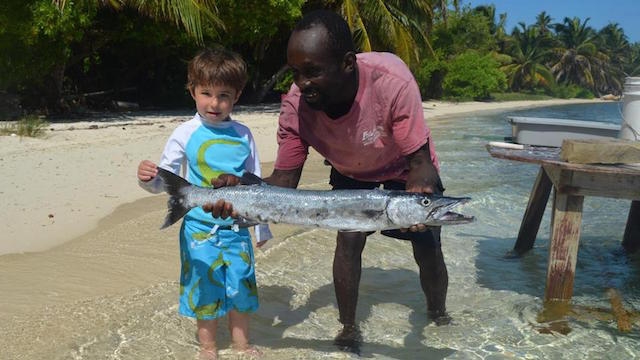 We are thrilled to have this article featured in the January 9th edition of the Boston Globe.  Travel writer Mara Vorhees and her 5-year-old twins joined us last season on our Lighthouse Reef Getaway Trip.  Mara shares her experience travelling with her young sons and their snorkeling adventures.

HALF MOON CAYE, Belize — Apparently, kids as young as 5 years old enjoy snorkeling. It must be true; I read it in the Lonely Planet.

Actually, I wrote it in the Lonely Planet guide to Belize, when my twins were less than a year old. It was hearsay. Now, five years later, I was about to find out if I had been leading readers astray.

For diversity of fish and brilliance of coral, few places rival the tiny Central American country of Belize, which boasts the second-longest barrier reef in the world. The twins and I would be spending a week on Half Moon Caye in the midst of Lighthouse Reef Atoll.

From a snorkeler’s perspective, Half Moon Caye is paradise, because you can walk off the beach into the water and swim out to the reef. No boat required. The island has the added advantage of being absolutely stunning and practically deserted. The only (sort of) settlement is the base camp for Canadian adventure company Island Expeditions, which is where we would be staying.

My almost-5-year-old-twins, Shay and Van, were excited about the adventure. We had been practicing with masks and snorkels in the pool, and both boys loved the freedom of being able to breathe and see underwater, even when there was nothing to see. I had high expectations that they would take to it like fish to water, so to speak. Of course, all wise parents know that high expectations are a precursor to disappointment.

Shay was nervous. On our first day at Half Moon Caye, he was whiny and anxious as we walked to the beach and got our gear on. He complained every step of the way — hot sand, long walk, stubbed toe, water shoes, no water shoes, leaky mask, tight mask, etc. But when he finally got geared up and put his face in the water, a magical transformation took place. It was less than a foot of water — there was nothing to see but minnows and sea grass — but both boys were entranced by the wondrous world they were suddenly allowed to enter.

Besides their masks and snorkels, the twins wore shorty wet suits for warmth and life jackets for flotation. And with that, they morphed into little sea creatures, content to float around and spy on the colorful fish populating the reef. We swam a short way out to a snorkel site known as Octopus Garden. There, we grunted greetings to the grunts; we studied sweet butterfly fish and dusky damselfish; and we came face to face with a grim barracuda.

The Island Expeditions snorkel guide, Daton, had brought a life belt for the boys to hang onto, so he could pull them around. But the twins were having none of that. Van wanted to hold my hand and swim side by side, while Shay wanted to swim independently. The whiny, anxious boy had become the master of the seas.

The next day our tour group planned to sail kayaks to a neighboring island, Long Caye, to picnic and snorkel. The twins and I would ride in the support boat. Unfortunately, as my boys were “helping” to send the kayaks on their way, poor Shay got his hand caught in a rudder. The scream was ear-splitting (at least to his mother’s ears); the skin was penetrated on two fronts. And with that, we bid farewell to any chance that my kid would snorkel again on this trip.

It’s not that the cut was so deep or so serious — it wasn’t — but when the saltwater came into contact with the open wound, it stung. Shay had no intention of allowing that to happen. I insisted that he get in the water. It seemed so silly to call off our plans just because he got a little cut on his hand. And I really wanted him to have another great day snorkeling.

Therein lay the problem. Under these circumstances, what I really wanted was irrelevant.

At the point that my child was hysterical in the water, I realized I had gone overboard (figuratively, as well as literally). We got back in the boat. And there we sat, fuming at each other.

Of course, I have twins; and Van still wanted to snorkel. Fortunately, he was content to go with his friend Daton, who pulled him around the reef on the life belt for almost an hour. And in the afternoon, he did it all over again with another guide. Fish to water, indeed.

Meanwhile, once Shay realized he would not be forced to snorkel, he turned into a sweet, cooperative, fun-loving child. And once I accepted that my son is an autonomous being with his own needs and desires, I turned into a sweet, cooperative, fun-loving mom. He and I explored Long Caye and lounged in hammocks, which was not what I intended, but it wasn’t the worst way to spend the afternoon.

The following day, we were scheduled to snorkel around the rim of the Blue Hole, the submarine sinkhole at the center of Lighthouse Reef. It was sure to be a highlight of the trip. The Blue Hole is the number one tourist destination in Belize, mostly attracting divers who descend to investigate the massive, mysterious underwater stalactites. Non-divers can also appreciate this World Heritage Site, as it’s thrilling to snorkel around the edge, admire the pristine reef, and peer down into the abyss.

Shay and I had a talk. I knew that I had made a big mistake the day before, by forcing him to go into the water against his will. But this would be our last opportunity to snorkel — and I still really wanted the twins to have another great day snorkeling. So we reached an agreement: He promised to get in the water and give it a try, and I promised that he could get out whenever he wanted.

Shay bravely fulfilled his side of the agreement. He was scared his hand would hurt, but he did try to snorkel for a few minutes. Then he was done. Shortly thereafter, Van decided that he, too, had had enough, perhaps deterred by the deeper, cooler, wavier water. So the twins climbed back onto the boat, where they were content to watch the snorkelers and feed crackers to the sea chubs.

I was disappointed they didn’t stay to see more. But then I regained my senses and appreciated my solitude, as I was free to snorkel all the way around the rim of the Blue Hole: swimming with schools of blue tangs; socializing with the Nassau groupers; and spying on trigger fish, angel fish, squirrel fish, and parrot fish.

Days later — after a week full of adventures — I asked the twins what was the best thing we did in Belize. My heart soared when both boys answered without hesitation: “Snorkeling.”

For my part, I was reminded that my children are autonomous little people, whom I can guide but not control, and who deserve my compassion, not coercion. And I can confirm that, indeed, kids as young as 5 years old enjoy snorkeling. Except when they don’t.

ISLAND EXPEDITIONS (www.islandexpeditions.com) offers the 5-day/4-night Lighthouse Reef Getaway for $1199 per person. The all-inclusive price includes all meals, accommodations, and transportation from Belize City, as well as gear and guides for snorkeling, kayaking, and stand-up paddling. Accommodations are rustic: platform tents, outside showers, and composting toilets. This “Lighthouse Getaway” can be paired with other adventures on the Belize mainland, such as staying in a jungle lodge or exploring Maya ruins.

Mara Vorhees can be reached at mvorhees@msn.com