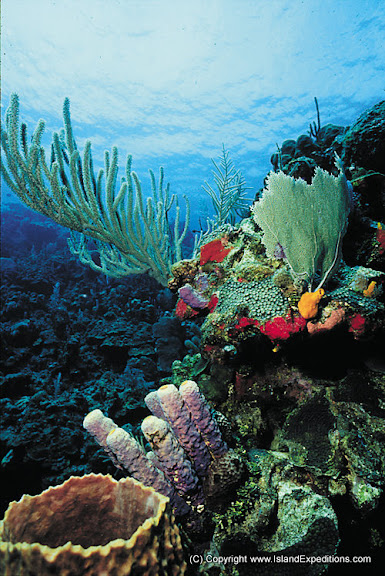 Coral reefs are hubs of biodiversity, providing habitats for a multitude of different types of marine life. Yet, coral reefs are not just homes for living creatures, they are also alive themselves. In fact, reefs are comprised of many layers of the skeletons of coral polyps and are covered by a layer of living polyps. Coral polyps are tiny carnivorous creatures which are sessile, which means that they remain fixed to one spot. These polyps sit inside calcium carbonate cups or skeletons and extend their tentacles to capture food such as tiny fish or zooplankton. Once coral polyps eventually die, they leave their skeletons behind, contributing to the continued formation of the coral reef. The structure of the reef is stabilized by algae and minerals, which cement the polyp skeletons together. Coral reefs rely heavily on warm water and sunlight to live. For this reason, coral reefs are primarily located in tropical waters within 30 degrees north and south of the equator. Also, because of their reliance on sunlight, coral reefs grow best in clear water. The ideal range of water temperatures for coral reefs is between 18 and 30° Celsius. As coral reefs grow, they will typically form into one of three main types of reefs -- fringing reefs, barrier reefs and atolls. Fringing reefs form along the shoreline of continents and islands, creating a border along the coast which extends out into the sea. Fringing reefs are the most prevalent type of coral reefs and are commonly found in the South Pacific and parts of the Caribbean. Barrier reefs form further off shore than fringing reefs. While they also surround landmasses, they are separated from land by a lagoon. These reefs tend to be large and continuous and form when land masses sink due to erosion or the shifting of the planet's crustal plates. Barrier reefs are most commonly found in the Caribbean and the Indo Pacific. While the largest and perhaps the most famous barrier reef is Australia's Great Barrier Reef, the Belize Barrier Reef is the second-largest barrier reef in the world and is also remarkable. Forming a 300 km long section of the 900 km long Mesoamerican Barrier Reef System, the Belize Barrier Reef is one of the world's most diverse ecosystems and is home to 70 species of hard coral, 36 species of soft coral and hundreds of different species of fish and invertebrates. The third category of coral reefs consists of atolls. Atolls are ring-like reef structures with a lagoon inside the ring. These start out as fringing reefs surrounding islands or volcanoes which eventually become submerged either by sinking beneath the water or as a result of rising sea levels. Atolls are commonly found in the Indo Pacific and the world's largest atoll, Kwajalein, encircles a lagoon that is more than 97 km in length. In addition to being divided into categories depending on how they are formed, coral reefs are also divided into various zones. Coral reef zonation is determined by a variety of factors such as light intensity, currents and relative position to the open ocean and river mouths. Different coral reef zones provide habitats for different creatures which have evolved to thrive under the specific conditions of a particular zone. While coral reefs can be divided into several different zones, the most common and easily identifiable zones are the reef flat, the reef crest and the fore-reef. The reef flat extends out from the shore and is characterized by shallow water and high light intensity. Coral growth is typically limited in the reef flat zone as the shallow waters of this zone are often subject to significant variations in temperature and sediment accumulation. Away from the shore, the reef flat slopes upward to the reef crest, which is characterized by intense light and well as intense wave action. As the highest part of the reef, the reef crest becomes exposed at low tide and typically features far more algae than coral. For this reason, the reef crest is also sometimes referred to as the algal ridge. The next zone, which is the furthest away from shore, is the fore-reef. Also known as the seaward slope, this reef zone slopes down into the ocean. Due to the limited wave action in this region, the fore-reef is where the largest corals are found and is also the most likely area to find sharks and other larger marine life. Due to their rich ecosystems and the abundance of life they provide homes for, coral reefs are sometimes called underwater rainforests. These aquatic wonderlands are treasure troves of tropical life and are spectacular to explore. Amateurs and professionals alike can experience the beauty and uniqueness of coral reefs through snorkelling and scuba diving expeditions. Both of these activities provide opportunities to explore reefs up close and to witness their amazing structure, life and diversity.

Contact Island Expeditions Belize at 1-800-667-1630 or info@islandexpeditions.com for information on one of their trips on the coral reefs of Belize.