Belize Birding: A Chance To See Over 540 Bird Species

Birding in Belize...
Belize is a sanctuary for over 540 bird species and a popular destination for birding. It is possible to see as many as 400 different birds on a single guided bird-watching tour. Due to the dedication and hard work of many people throughout the years, Belize has managed to become a premier destination for those who love birds and want to see the colors and interactions of these fine creatures in their natural habitat. Protected as part of Belize's heritage, conservation efforts have preserved the land, area and birds themselves. The Belize National Parks System Act (1981) initiated the establishment of protected areas that have long been maintained for the preservation of wildlife, land, and heritage. From colorful parrots to tiny hummingbirds, Belize has a diversity in birds that is unique from anywhere else in the world, and below you will find some info on a handful of the birds you can expect to see while you are birding in Belize.
Frigate Bird 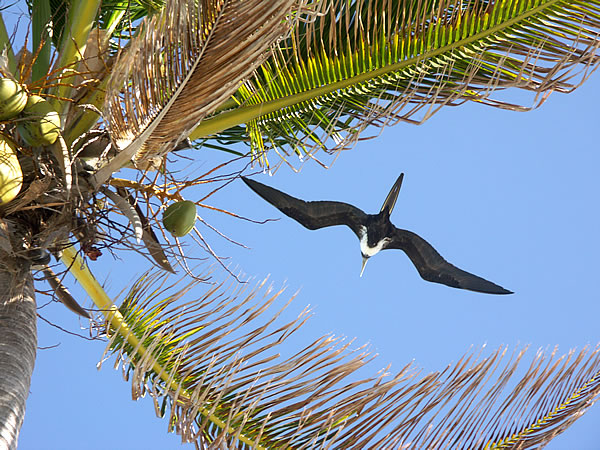 Frigate birds are characterized by their black feathers and forked tail. The females tend to have a white belly, otherwise their feathers are black. The males have a bright red throat pouch called a gular sac) that puffs out when filled with air during the mating season. Females have white throats, complementing their white bellies. The frigate bird wingspan can be up to seven feet across, over twice the size of their bodies. Due to this large wing to body size ratio, frigate birds cannot take off like other birds and can barely walk. What they can do is float around on wind streams for a week at a time, only landing to roost or mate. Frigate birds take food that comes close to the water surface or steal it from other birds. This type of feeding is known as "kleptoparasitic".
Red Footed Booby 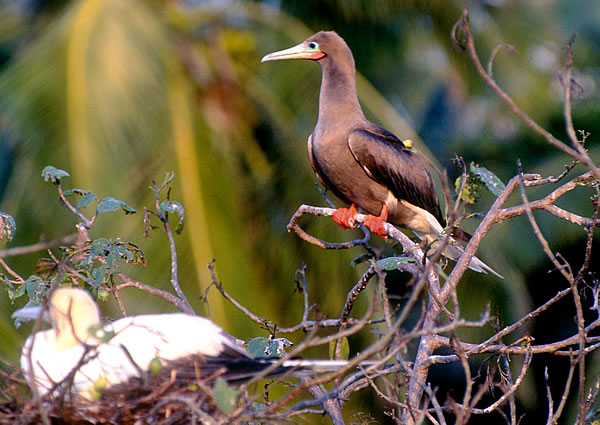 Red Footed Booby birds can be found nesting in the Orange-flowered Ziricote thicket in the western end of the Half Moon Caye. Sharing the area with frigate birds, the squawking and screeching can be quite the noisy experience, but the parenting birds are so busy with their young, they hardly notice it when people get up close. The Red Footed Booby birds live on the caye starting from mid-December and leave in August, with about 4000 breeding birds calling the caye home during this time. The chicks hatch in March, then a few months are spent growing and then it’s time to take care of themselves, feeding on fish and flying about enjoying the beauty of Belize. 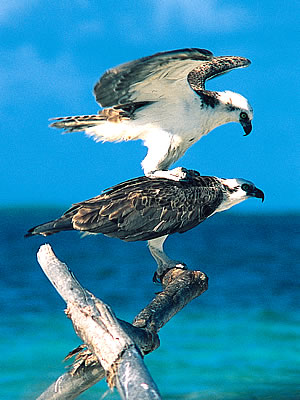 If you look up high in the trees, you may see the watchful eyes of the osprey looking out for a meal. With a swoop from the tree tops, the osprey can dive deep into the water to grab a fish below the surface. Effective fishers with sharp talons and beak, osprey are also known as fish hawks, though they on rare occasion will catch and eat rodents and other small mammals, amphibians, birds, and even small lizards. This large bird of prey has a wing span of up to 6 feet in length, with a body about 2 feet long. Ospreys make the largest nests of any North American bird, with the nests sometimes being as large as 6 feet high.
Wood Stork 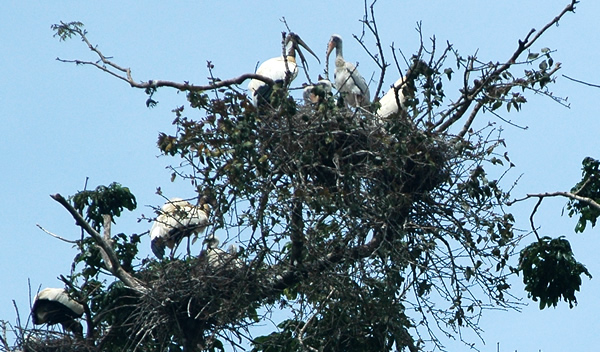 The wood stork is very large, some almost 4 feet tall, with a wingspan close to 7 feet in length. These beautiful birds are white with a bald head, and can be found wading in water up to their chest as they forage for food. Wood storks have a unique way of catching food, in that they open their bills in the water and wait for a fish to swim by, at which point they snap their bill shut at a reaction speed faster than most any other vertebrate. When in breeding season, a pair of adult wood storks and their chicks can feed on as much as 400 pounds of fish. Wood storks are social animals, and will sometimes several pairs will nest in a single tree.
Jabiru Stork 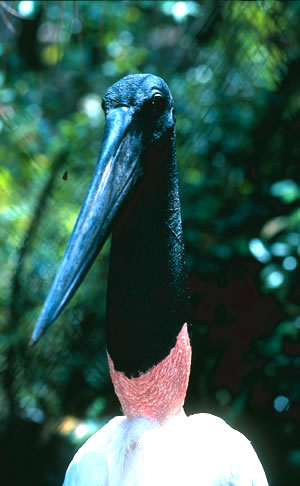 The name of the Jabiru stork means "swollen neck", and when you see the black and red area at the base of the neck, you will understand how it got its name. The male and female look similar but the male is larger, something that is noticeable when paired. It has a big black bill that is slightly upturned. It is the tallest flying bird of the area. With a body of about 4-5 feet in size and a large wingspan that can reach 7 feet, the Jabiru stork looks clumsy on land but is a graceful and strong flier. The Jabiru is a social animal and lives in near rivers and ponds, eating fish, mollusks, amphibians, and even the odd reptiles, eggs and small mammals. It has also been known to eat fresh carrion and dead fish. With a lifespan that can reach 36 years, pairs of Jabiru Stork may only breed every other year, as raising chicks takes a few months.
Roseate Spoonbills 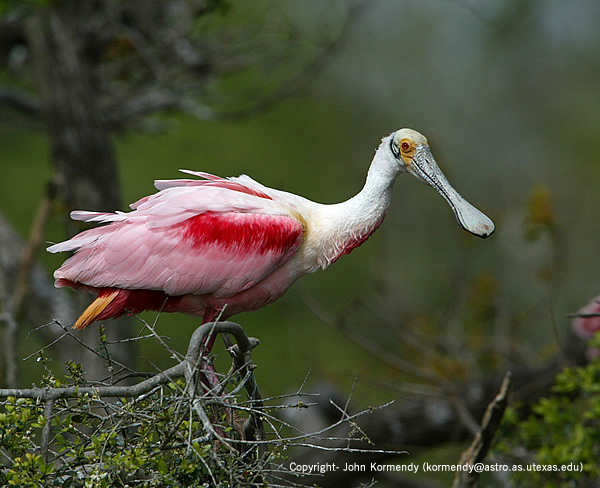 It is easy to see how the Roseate Spoonbill got its name: it has a distinctly spoon-shaped bill. With its pink legs, wings and fringe, white head and chest, the Roseate Spoonbill is very unique looking. Its wingspan can reach 4 1/2 feet, and it stands about 2 -3 feet tall. The male and female have the same colorings, but the male is slightly larger than the female and even has a slightly larger bill. Roseate Spoonbills are social and live amongst many other type of birds. It feeds by sweeping its spoon-bill side to side in water, catching fish, mollusks, insects, and snails in its touch-sensitive bill. Like the famous pink flamingo, the Roseate Spoonbill's coloring comes from the food it eats, namely the algae diet of crustaceans it feeds upon.