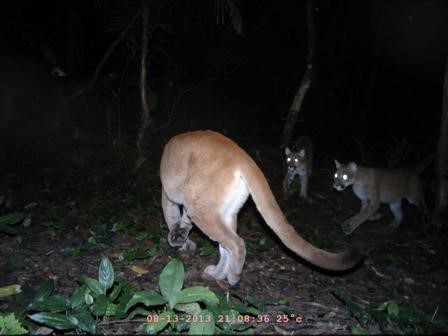 Dr. Bart Harmsen, through Panthera and UB/ERI has been conducting research using camera traps in the Cockscomb Basin Wildlife Sanctuary.  We wanted to share some interesting observations:

Between 8:28 pm (August 13th) and 3:22am (August 15th) several photos capture three curious pumas playing, about an hour and a half after they leave, a male jaguar passes by.  (This is an interesting occurrence as both mammals are large cats.)  Less than fifteen minutes later, at 5:06am, one of the curious pumas passes by looking alert and cautious.  In the evening of August 16th, at 6:48pm the three curious pumas return to play.

2)     A camera trap placed near 13 ½ kilometres on the Victoria Peak Trail captured a pregnant jaguar making her way toward a stream.

Clearly the Wildlife Sanctuary continues to serve its main purpose, protecting the wildlife population that make the area their home. Stay tuned for more feline tales from Cockscomb